Passstaaa. Yum. The sound of the delicious Italian invention always makes me drool. And it has always been a top favorite among my list of non-Asian foods. Definitely not the most diet-conscious type of food around, but, who cares, when it’s so lip-smackingly gorgeously delicious? Bring on the carbs!

Not too long ago (let’s put it about 2 weeks back), I had to prepare dinner and was thinking of just cooking spaghetti and dumping a package of store bought Bolognaise sauce. But, I thought, it probably would taste as well as the effort I put into that. So, I decided I would do it the right way, and cheat only with the tomatoes. But, the meat had to be real. So, I tested a very simple recipe, and got awesome reviews for it! Sharing it is the only option, since I borrow recipes from everyone else once in a while.

1) Chop the onion into small tiny cubes and stir fry in a wok till caramelized
2) Meanwhile, marinate the minced meat with some salt, and soya sauce
2) When the onions are turning golden brown, add the minced meat to the wok, and stir fry till cooked
3) Add the tomato sauce to the cooked meat, and let it simmer over low heat
4) Cook the spaghetti in boiling water for 8-12 minutes (test to see if its cooked by throwing it against the kitchen wall – if it sticks, the pasta’s ready to be eaten).
5) Serve the pasta and pour the Bolognaise sauce over. 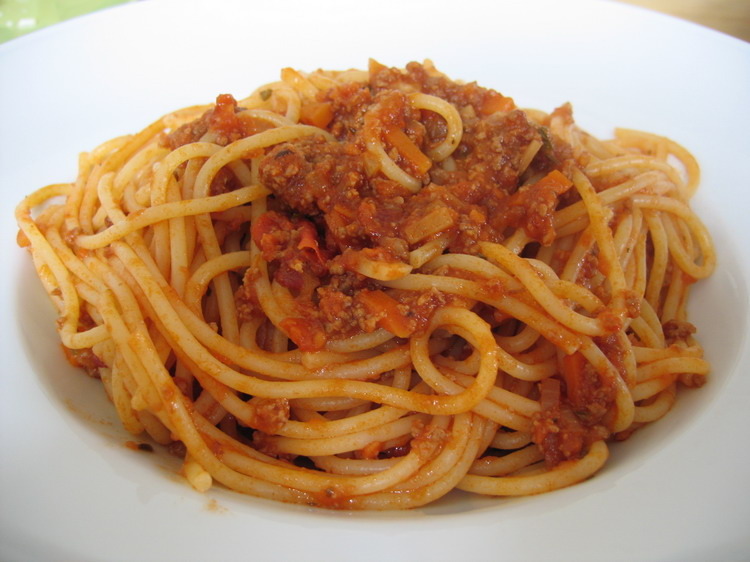