It had been such a long time since I’d called my grandparents.

So long such that I’d been dreaming about them, missing them, and come that evening on Sunday night I finally pick up the phone and dial the number that I have memorized by heart, my legs curled up on the couch, with my sister Val sitting next to me.

My grandfather, who’s partially deaf, picks up the phone, and his loud booming “HELLO?” echoes through our Skype VOIP connection, reaching me all the way from Singapore to Buenos Aires, Argentina. It is such a relief to hear his voice, and in my fit of excitement, I shout back “YEYE?”, which stands for “grandpa” in Mandarin.

He speaks loudly because he can’t hear well, and so our short conversations sounds more like a shouting match than a happy, relieved phone call. “It’s been a while since I’ve heard your voice,” he tells me, and I sheepishly agree, knowing I should have and could have called sooner, and also more frequently. Because my grandfather is the kind of man whose harsh exterior belies his love for his grandchildren, he speaks little but there is so much love, I can feel it spilling out of the phone. 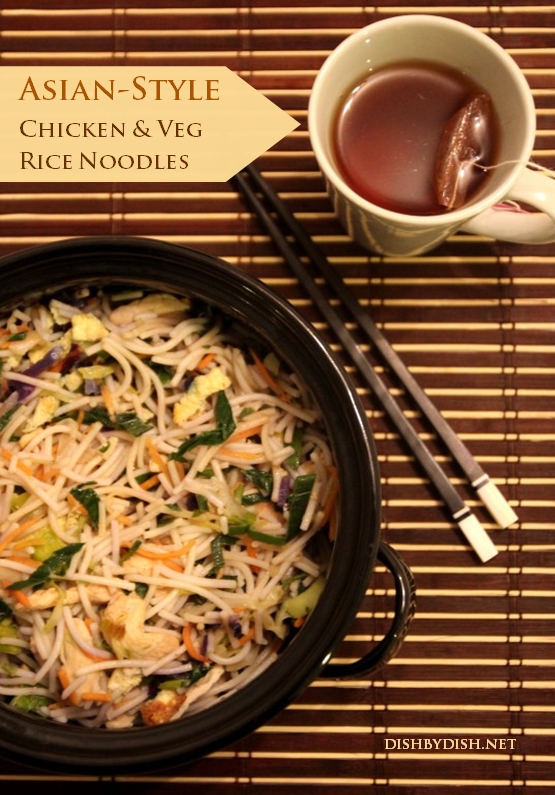 After a few short minutes of hearing our voices, he passes the phone to my grandma, whom some of you might have already met, when I wrote about these almond cookies and these lemon squares. My grandma’s a lot more expressive, and she jokingly berates me for forgetting about her, and I feel a tinge of guilt, but then I also know it’s her way of saying she misses me.

My baby cousin En Tong was at my grandparents’ home that day, down with a cough of some kind so she didn’t go to school, and my grandma made her sing us a couple of songs, which made me choke up and tear, because I wanted to see her in person, and watch her grow up, something I haven’t been able to do. I smile through my tears as I hear En Tong’s angelic voice playing out the lyrics of some songs she’s learnt from school and church, and I think of how much I miss home, but then, also of how fortunate I am to have family I can call.

It’s times like these that my Asian roots start calling me home, there’s a yearning to be physically near my family, both immediate and extended, and it’s hard to shake off the need to be closer. I decide instead to bring Asia here to me, or at least in the kitchen, so my stomach is warm with the flavors and fragrances of the place I’ve always known as home, Asia. 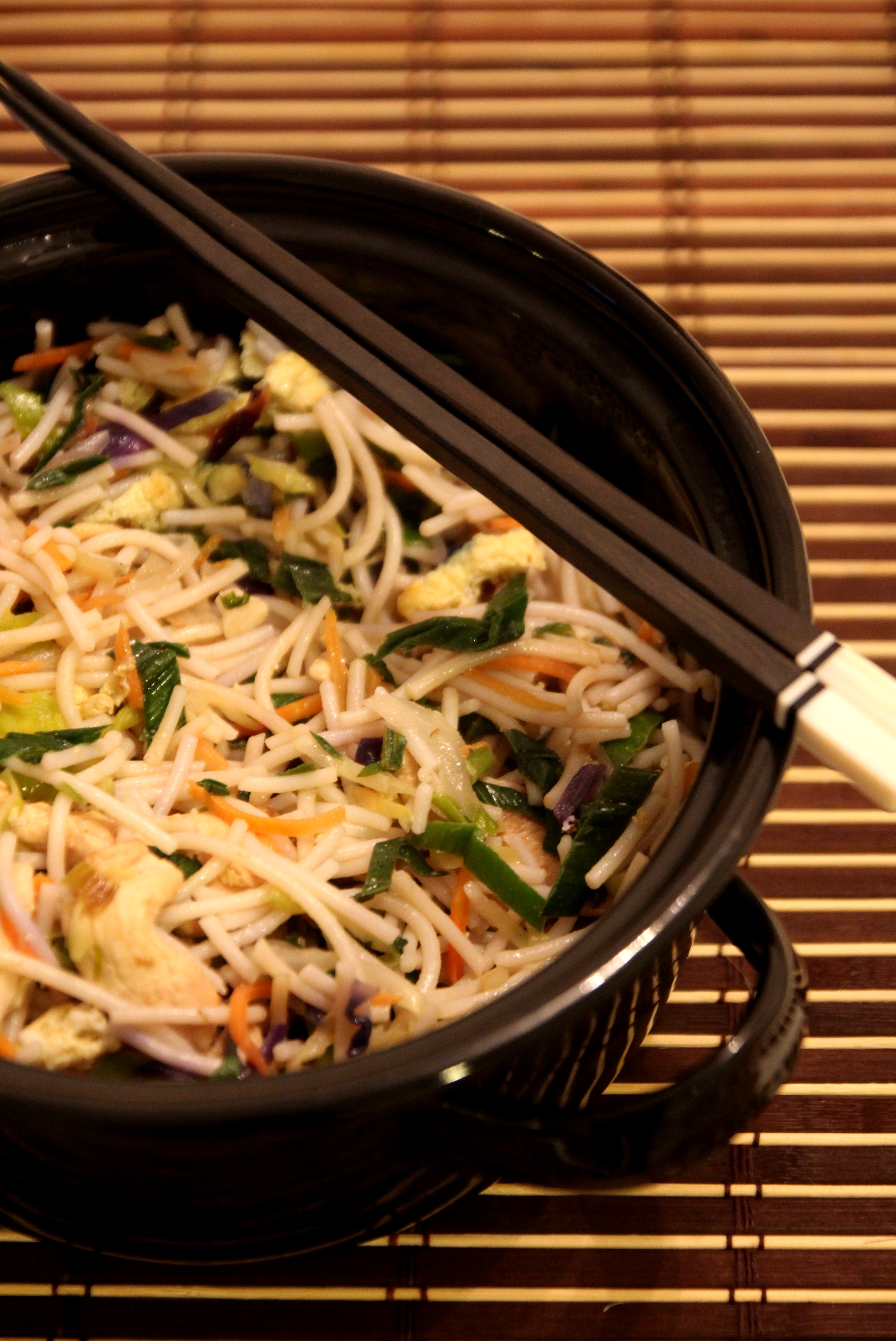 When I think Asian food, I’m brought back to the road-side food stalls where ambience isn’t fantastic but food is cheap and completely delicious. Where the smell of stir-fries blow into your hair and leave you feeling slightly dazed, but where you can hear the metals ladles clashing against metals pots and pans, the rhythmic sounds of a woman chopping chilies on her wooden board somewhere in the distance, and where all around everyone seems to be chomping down on their meals.

For me, Asian food is largely associated with stir-fries, where the mightily useful wok is often involved. And because I love stir-frying for its ease and practicality, I wanted to replicate that Asian experience in Buenos Aires.

This is a really simple dish – ingredients are really up to you, but for a balanced meal, I wanted to incorporate both a stunning array of freshly cut vegetables and some chicken breast for some healthy white-meat protein. 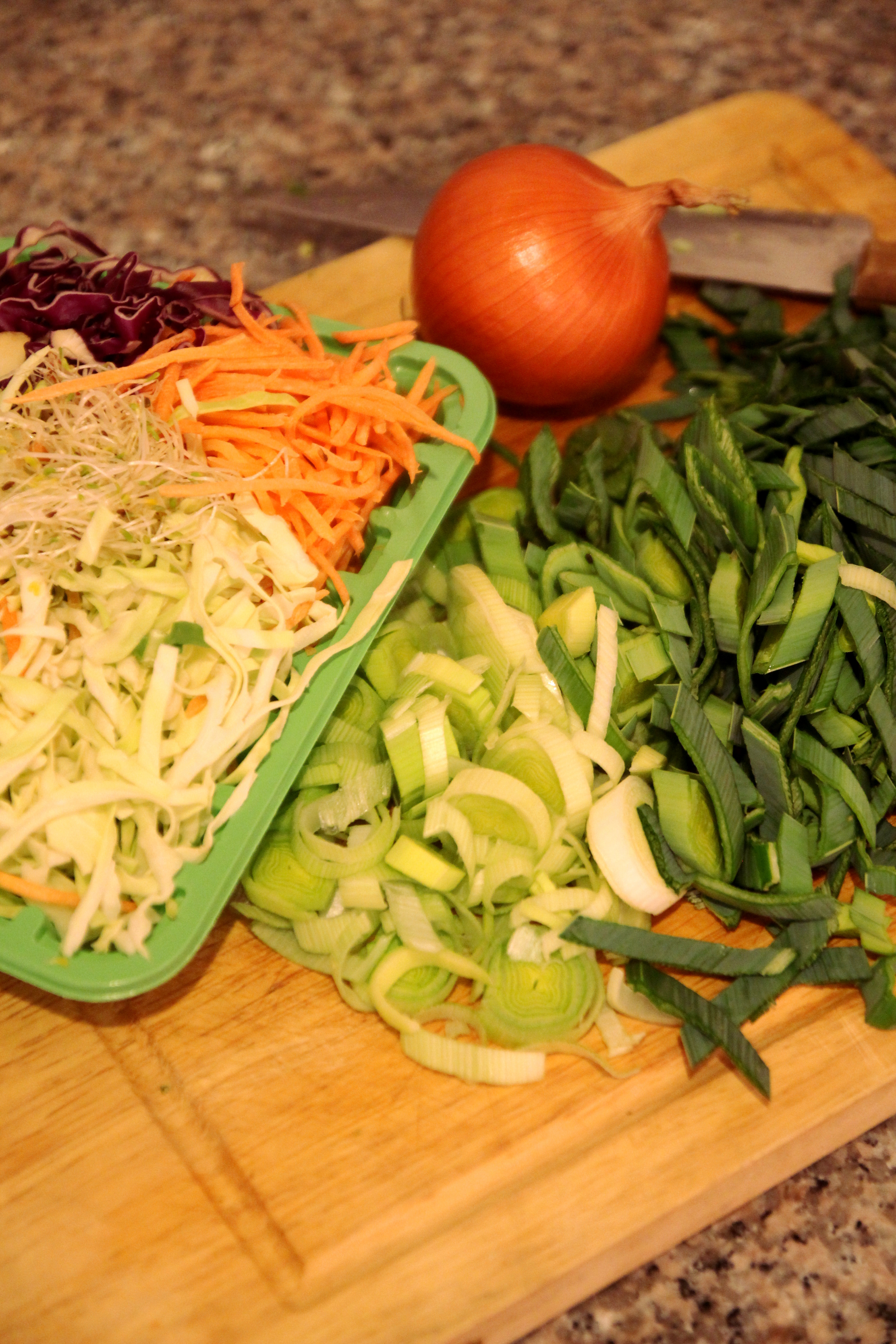 I chose a combination of red and white cabbage, onions, leeks, carrots and spinach, but between you and me, anything you fancy or any vegetable that’s in your fridge can be thrown in.

The first thing you do is to cut the chicken into thin strips, then marinate them with light soya sauce and let it sit. Later, you wash the vegetables well, then slice them as thinly as possible, stir-frying them until just cooked and the aroma starts enveloping you. Can you smell the leeks? Hmm….the aroma is just so beautiful. If so, the veggies are ready.

Right now is the time you start to sauté the onions until they turn transparent, then throw in the marinated chicken strips until cooked and white throughout. Then break a couple of eggs and cook a quick and easy omelet, which you later slice into strips. 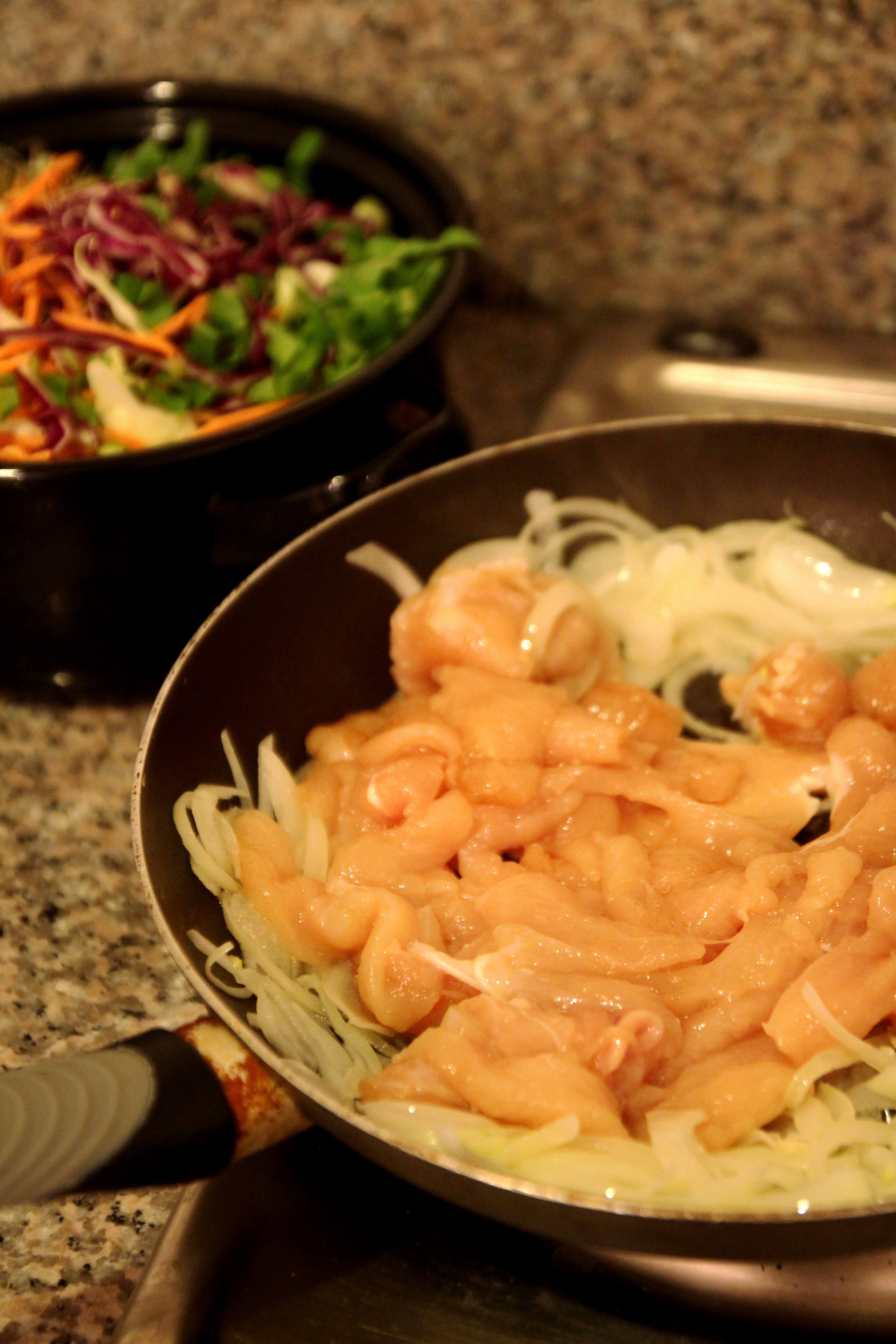 The highlight of this dish really is the white rice noodles, which uncooked look like translucent glass ribbons. As you cook the noodles, submerging them in generously-salted boiling water, they start turning a pale white color. Because rice is the main staple in Asia, I gravitated towards rice noodles instead of wheat noodles (like pasta), in order to best re-create my Asian memories. Of course, if you absolutely can’t find rice noodles, which are usually available in large supermarkets or Asian grocery stores, there’s no harm done in swapping it for spaghetti.

Once cooked and a pretty-white, I mix the rice noodles with all the other cooked ingredients, stir-frying them in a large pot (for lack of a wok). Pour some light soya sauce over it, adding a bit more at a time to your fancy, and keep on stirring for a few minutes.

The best way to eat these lovely noodles? With a piping hot mug of tea for company. 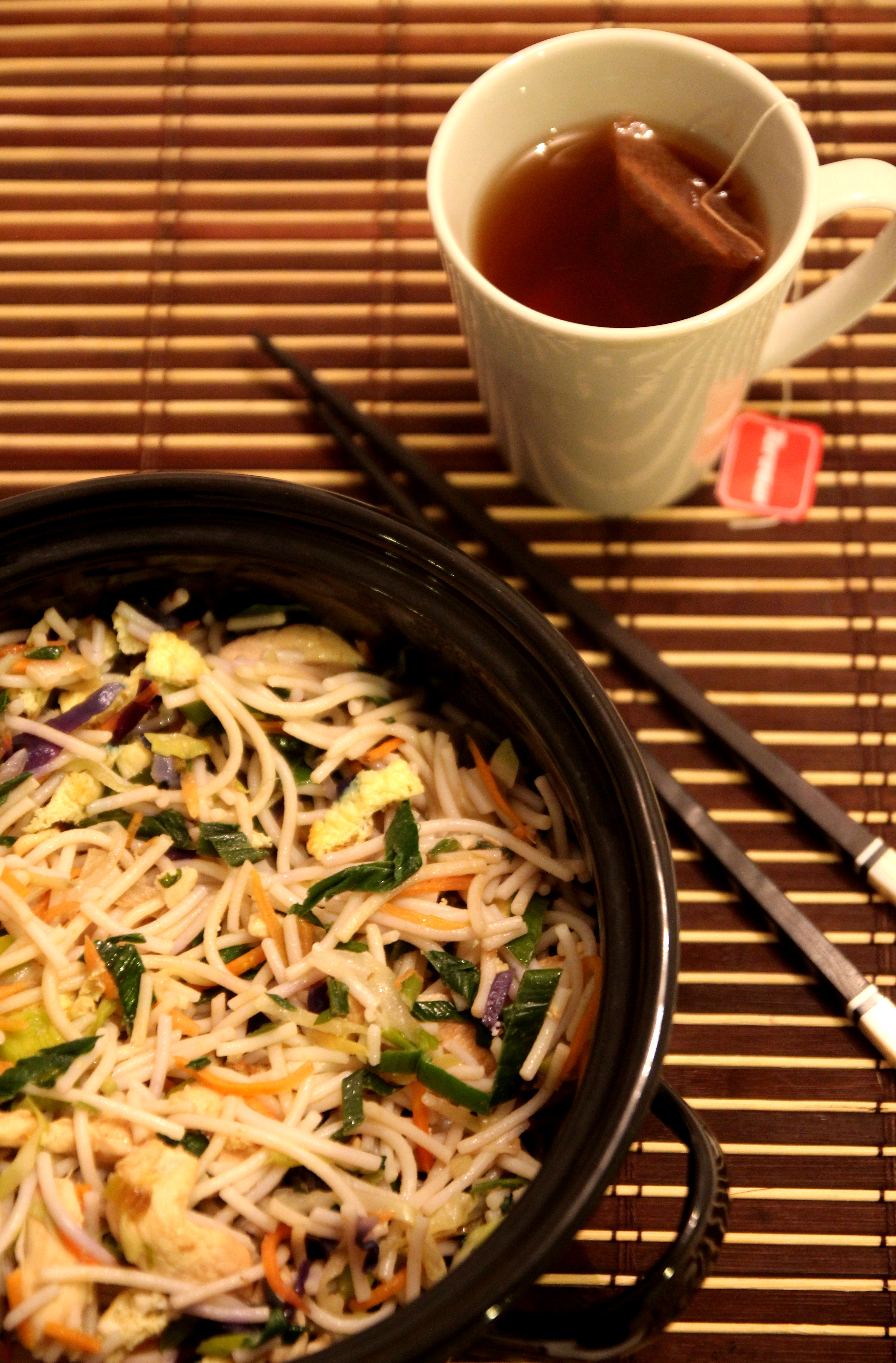 1)    Cut the chicken breast into thin strips, marinade them with 2 tablespoons of soya sauce, and let it rest for at least 15 minutes
2)    Slice and cut your vegetables
3)    In a saucepan, heat up a little oil and sauté the onions until transparent, then add the marinated chicken strips until cooked through, the remove the chicken from the pan and set aside
4)    Using the same saucepan, cook an omelet using the three beaten eggs, and remove from pan once cooked, then slice into small strips
5)    In a large pot, heat up a little more oil, and start sautéing the leeks, and then add in the rest of the vegetables, cooking them over low heat
6)    Meanwhile, cook rice noodles according to package instructions, then drain well
7)    Add cooked rice noodles to the pot of vegetables, stirring well, and pour soya sauce over evenly
8)    Add in strips of fried egg, chicken, stir well and then serve.

In a saucepan, heat up a little oil and sauté the onions till transparent, then add the marinated chicken strips until cooked through, the remove the chicken from the pan and set aside: 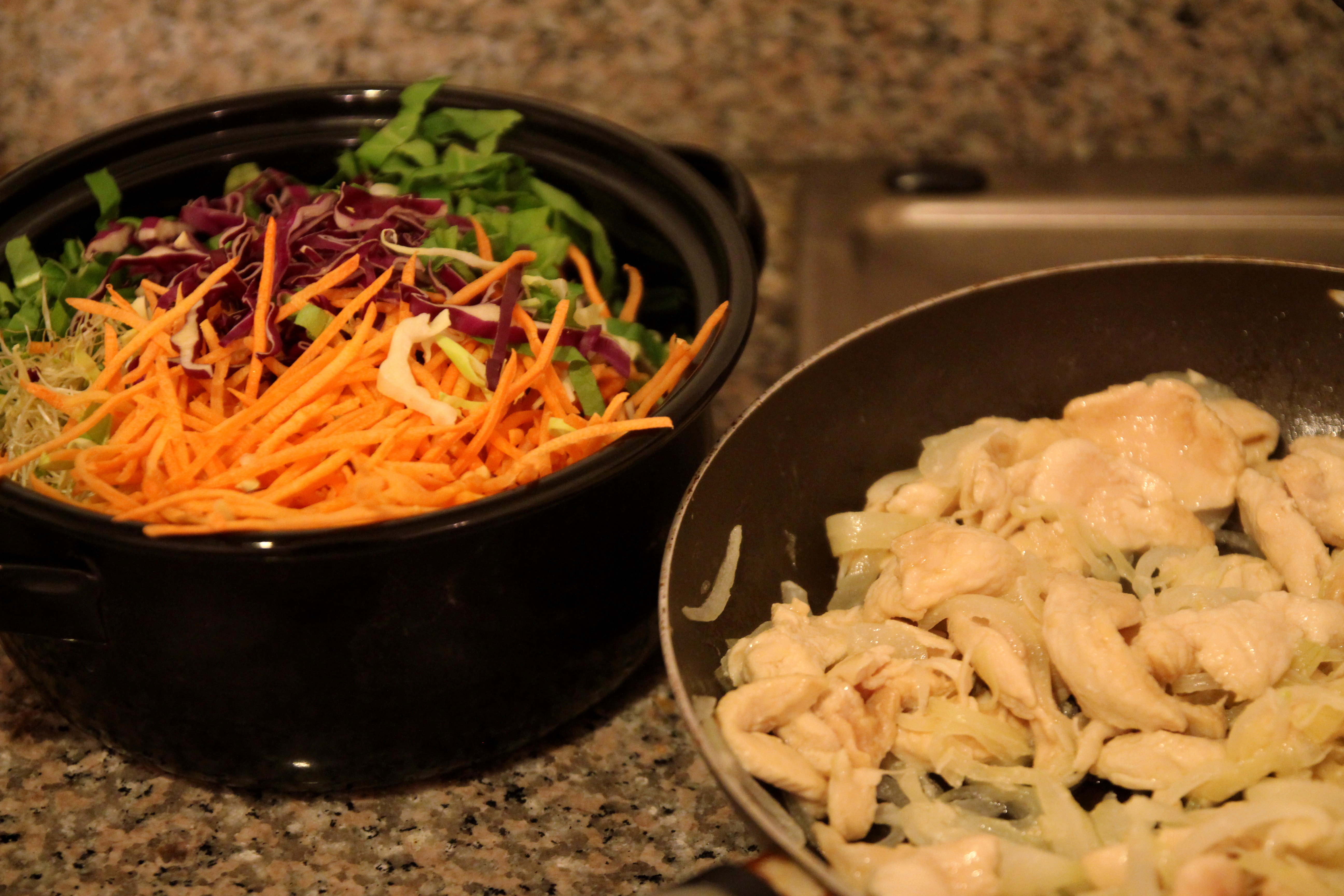 In a large pot, heat up a little more oil, and start sautéing the leeks, and then add in the rest of the vegetables, cooking them over low heat: 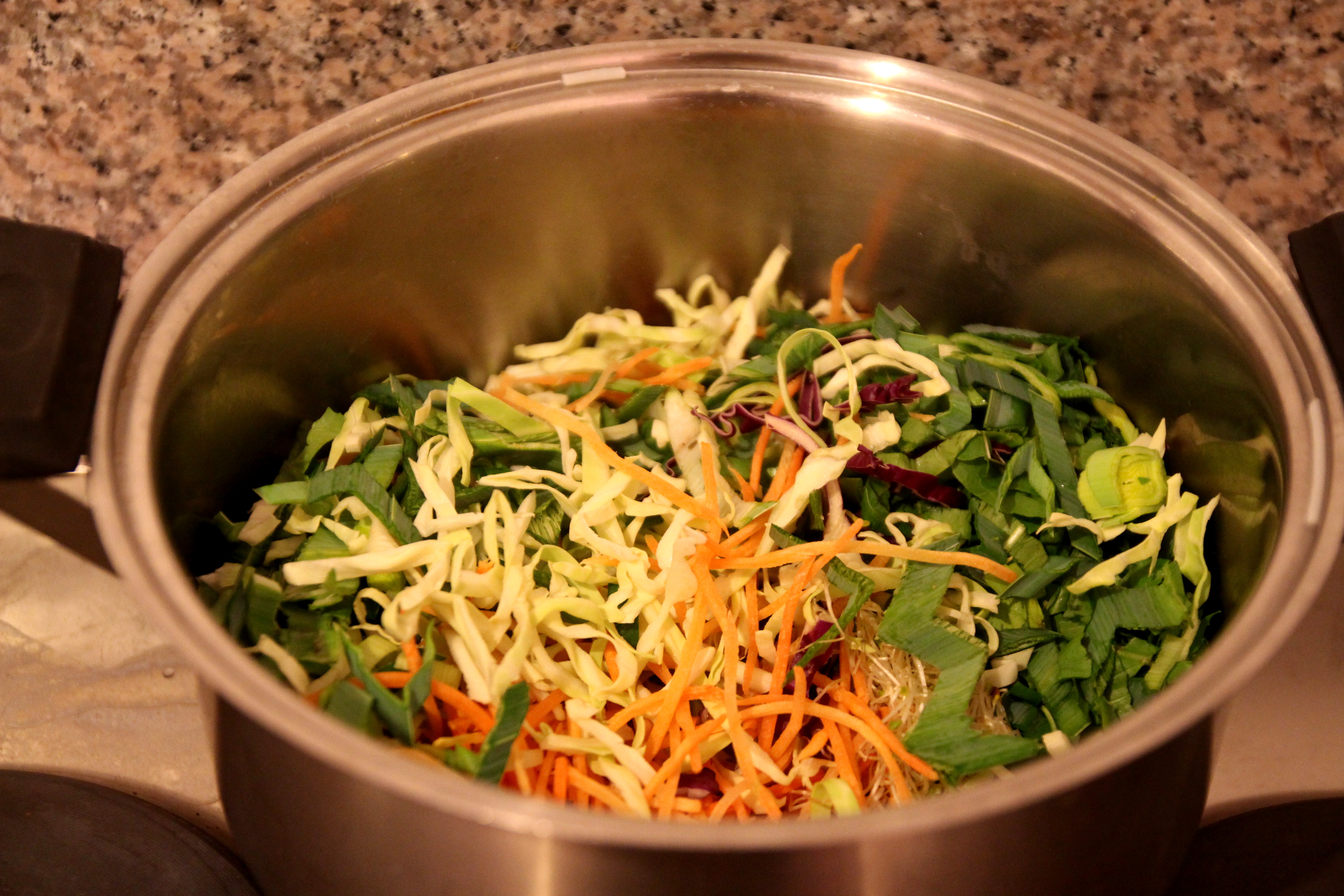 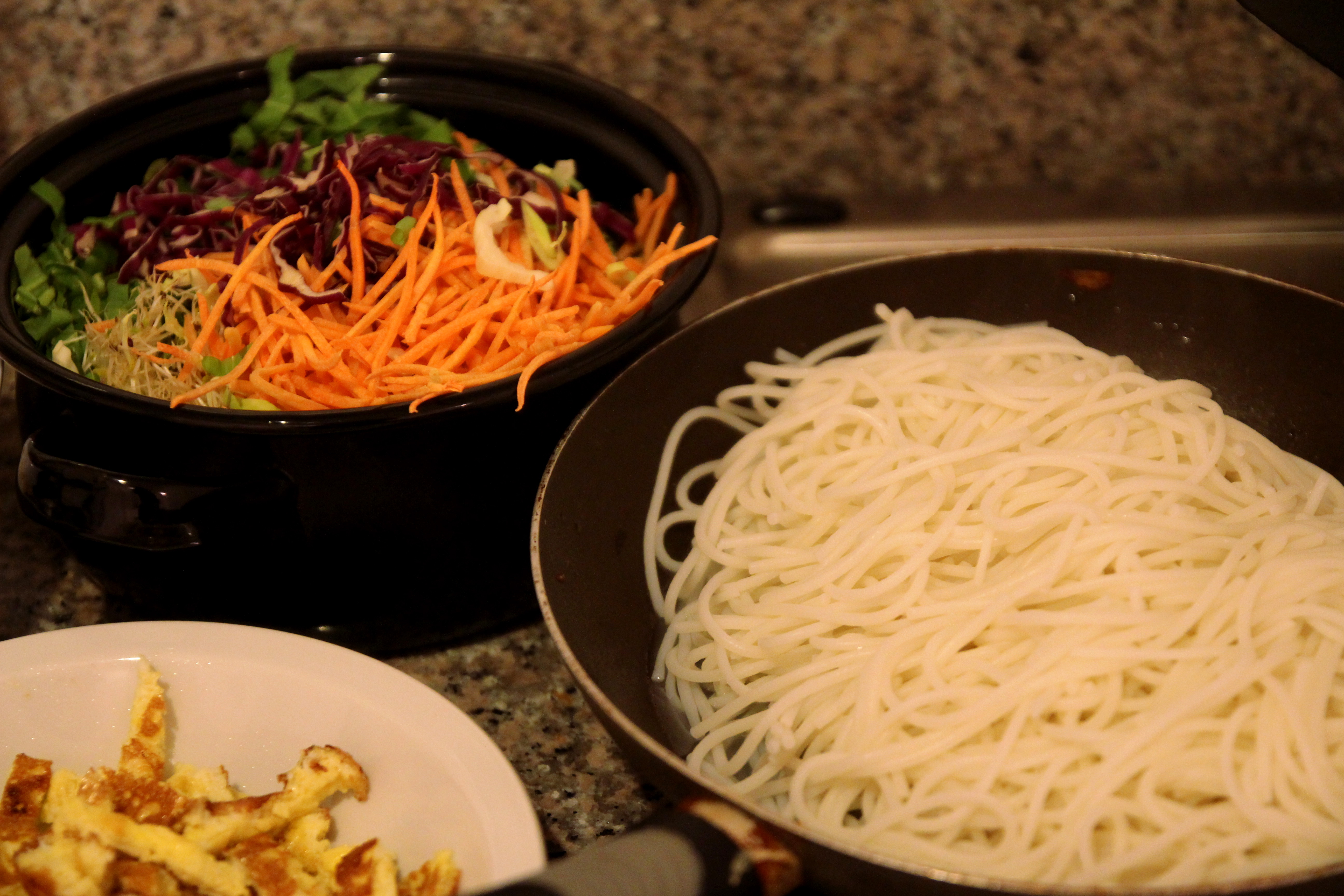 Add cooked rice noodles to the pot of vegetables, stirring well, and pour soya sauce over evenly, then add chicken and egg: 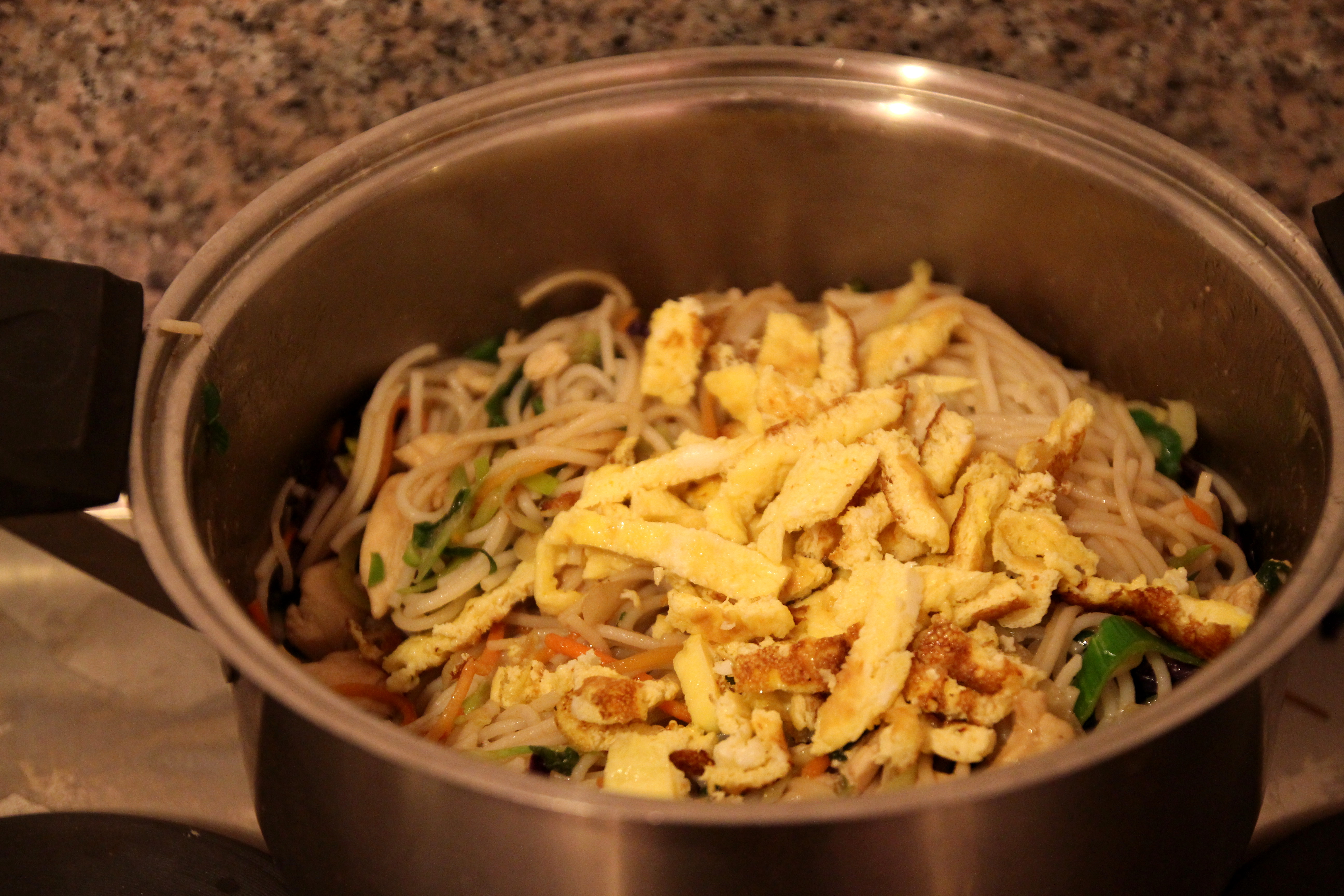 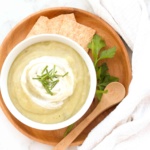 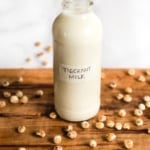