After some prodding and convincing, my sister Valerie finally decided to extend her stay in Buenos Aires by another three weeks till the end of August!

I’m exhilarated to be able to spend more time with my little sister, and to be honest, I believe she’s staying more for the horses than for me, but shhh, between you and me, let’s just keep it a secret.

This past week has been a flurry of so many activities – the majority of which is made up of  searching for a suitably nice and relatively cheap apartment for her extra days in Argentina.

Trust me, I never knew how hard and tough it was to make a decision on apartment rental until now – I suppose it’s partly to do with me being too demanding, expecting all the available facilities at an affordably good rental price. 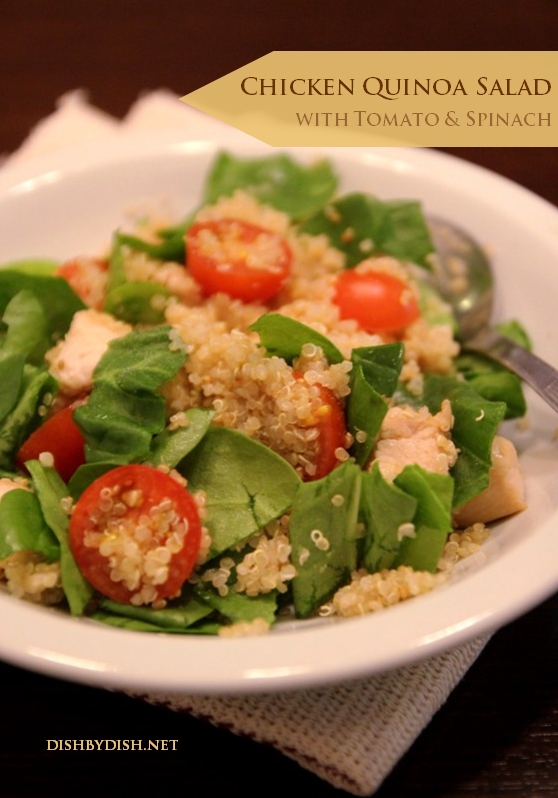 Because Valerie is quite complicated with her food – not for health reasons, but simply because she isn’t one of those who will eat almost anything put on their plate (like I am) – I’ve had to think of interesting food combinations incorporating ingredients that she will eat, particularly when we cook at home (sorry, correct that – when I cook at home, since Val has zero interest in the kitchen).

While we’re sisters through and through, we are completely opposite when it comes to eating food – I love exotic, spicy flavors, while she goes for the milder, more familiar tastes. I enjoy trying food that’s out of the ordinary, but she could probably eat the same dishes over and over again, without getting bored.

She’s the sort of person who will always smell her food before eating it, whether it’s vegetables, or soup, or creams or dips, nothing gets to the mouth before the initial scent approval check. 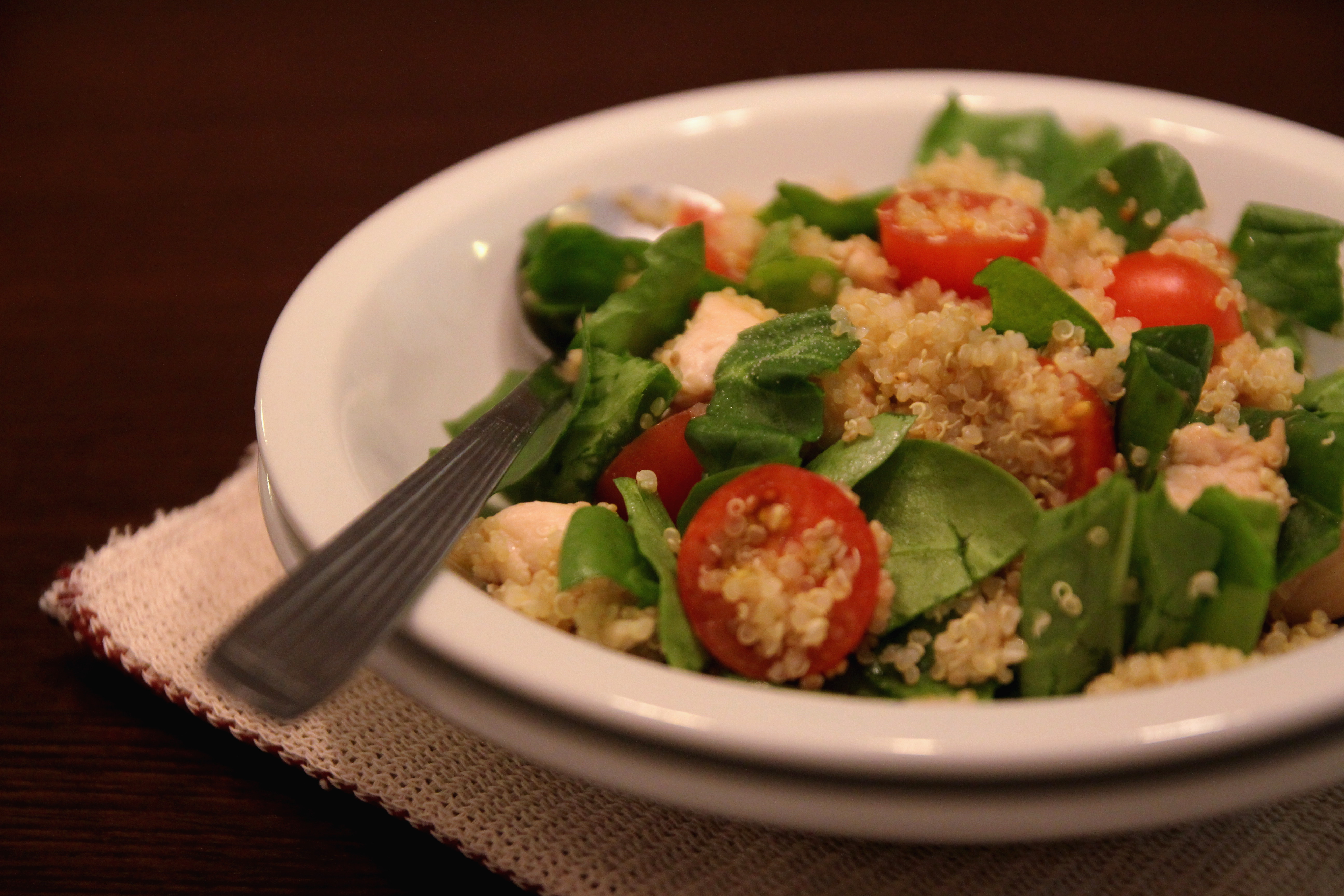 The other day, after a long hiatus of using quinoa in my kitchen, I was yearning to make some sort of a quinoa salad, inspired mostly by Min’s guest post on mango quinoa salad with shrimp. I wasn’t sure if Valerie would like quinoa, since she’d never eaten it (or smelt it) before. 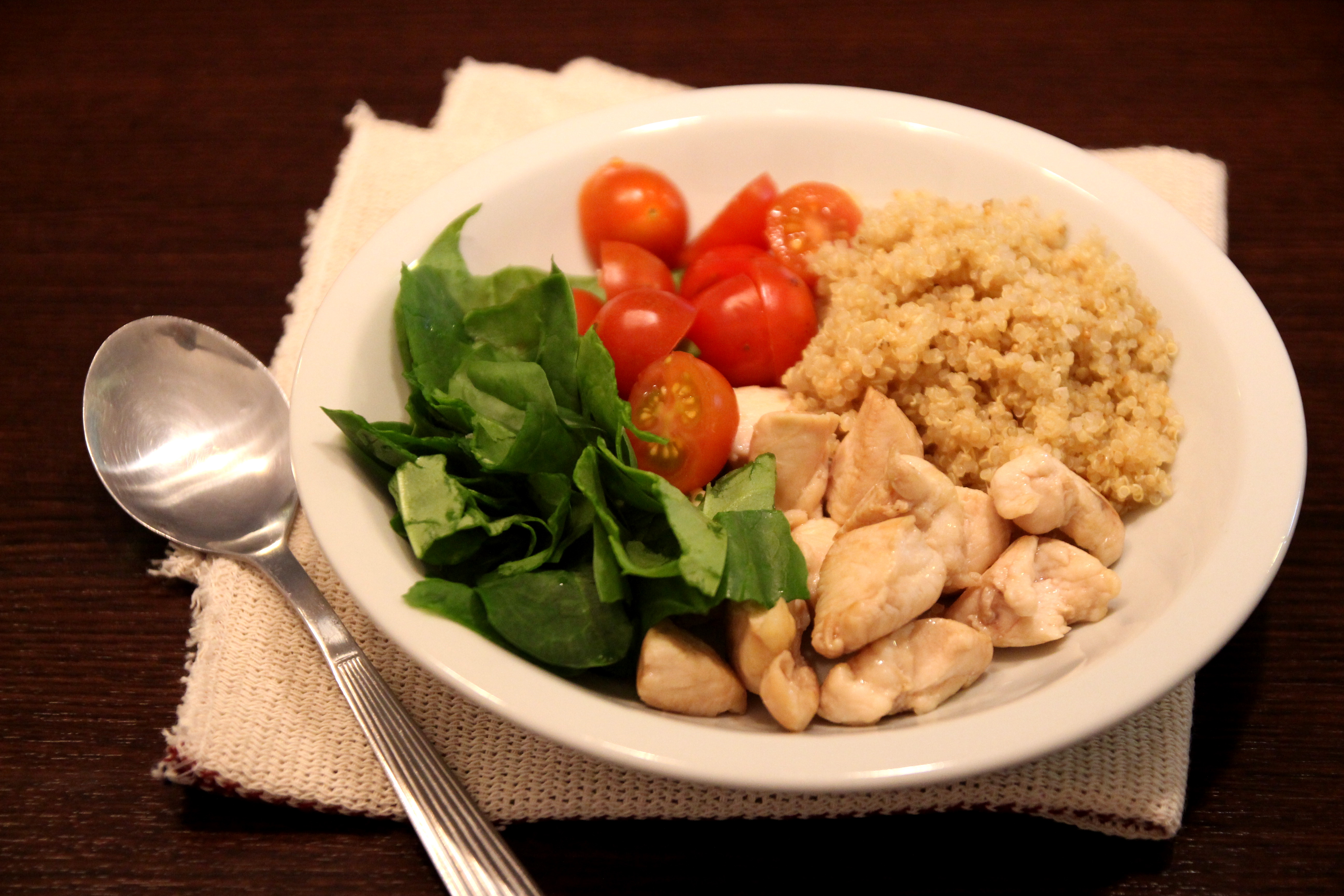 But because of the increasing use of quinoa in salads and diets, both here in Argentina and in the States, I was keen to return to the nutty-flavored ingredient – the one whose smell emanates the kitchen as you cook it slowly over low heat. It was a thought that first started off as a suggestion, but when I started to google ideas for cooking with quinoa, I became more and more hooked with the idea of making a quinoa salad.

One that was both substantial, and tasty, yet refreshing and light. 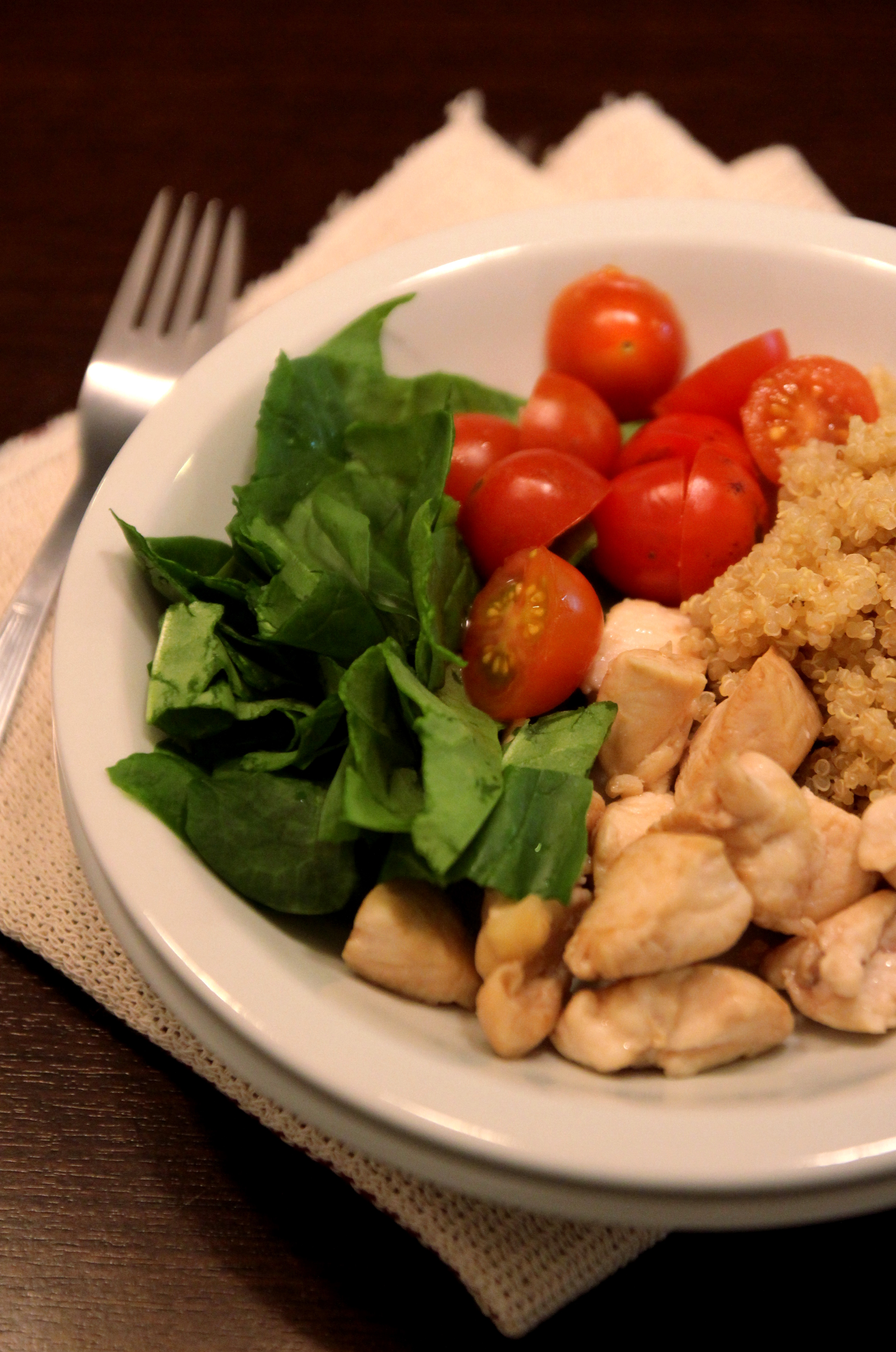 A salad that included chicken, marinated in just soy sauce and a pinch of salt, then lightly stir-fried in little oil over low heat. A dish that also incorporated bright, vibrant greens and reds, from crispy fresh spinach leaves and juicy oval cherry tomatoes.

I liked it very much, and thankfully, so did Val. 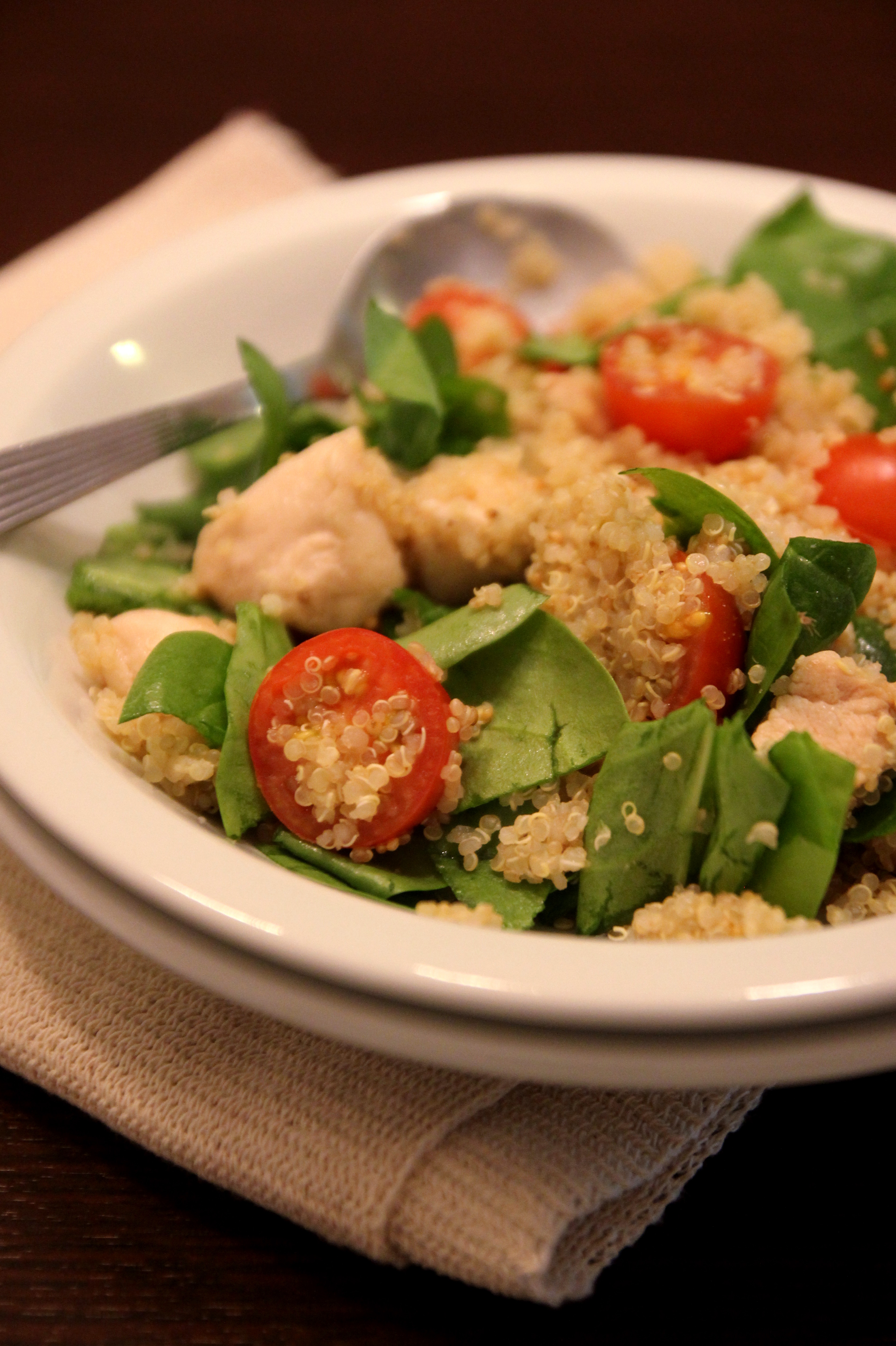 1) Cut chicken breast into small cubes
2) Season chicken cubes with a pinch of salt and the 2 tablespoons of soy sauce with your hands, and let it marinate for at least 15 minutes
3) Meanwhile, rinse uncooked quinoa until the water is clear
4) Pour uncooked quinoa and water (or stock) in a small pot
5) Cook on high heat until water starts to boil
6) Bring heat down to minimum and cover pot, allowing quinoa to simmer for 10 minutes
7) After 10 minutes, switch off fire, and let quinoa stand for 5 minutes (with the cover still on)
8) After 5 minutes of standing, fluff quinoa with a fork
9) Stir-fry marinated chicken cubes in a small pan with a bit of oil, until just cooked but not hard
10) Cut cherry tomatoes into half
11) Slice spinach leaves roughly
12) Combine cooked chicken cubes, tomatoes, spinach leaves and quinoa
13) Sprinkle a pinch of salt over and mix well

Stir-fry marinated chicken cubes in a small pan with a bit of oil: 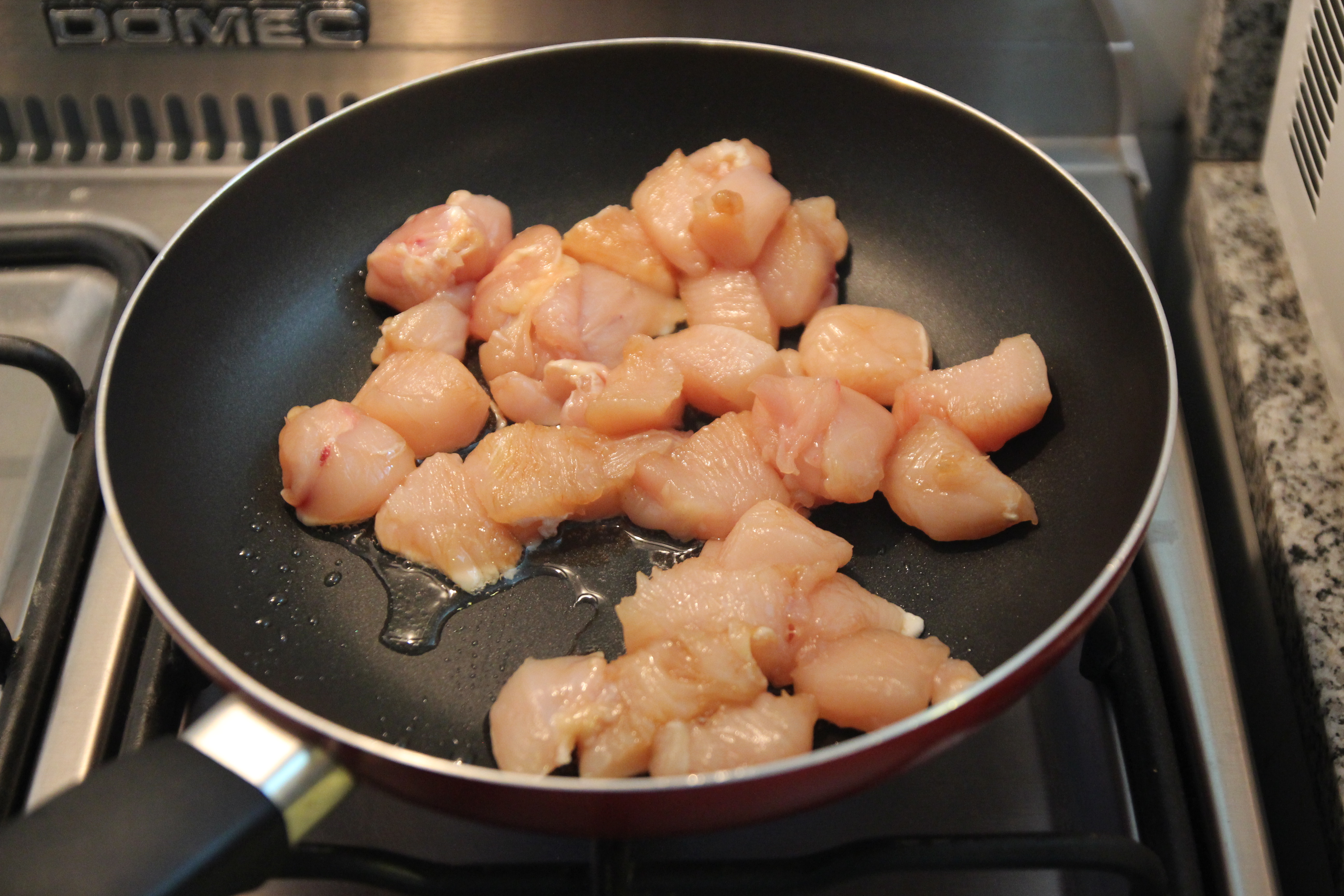 Until just cooked but not hard: 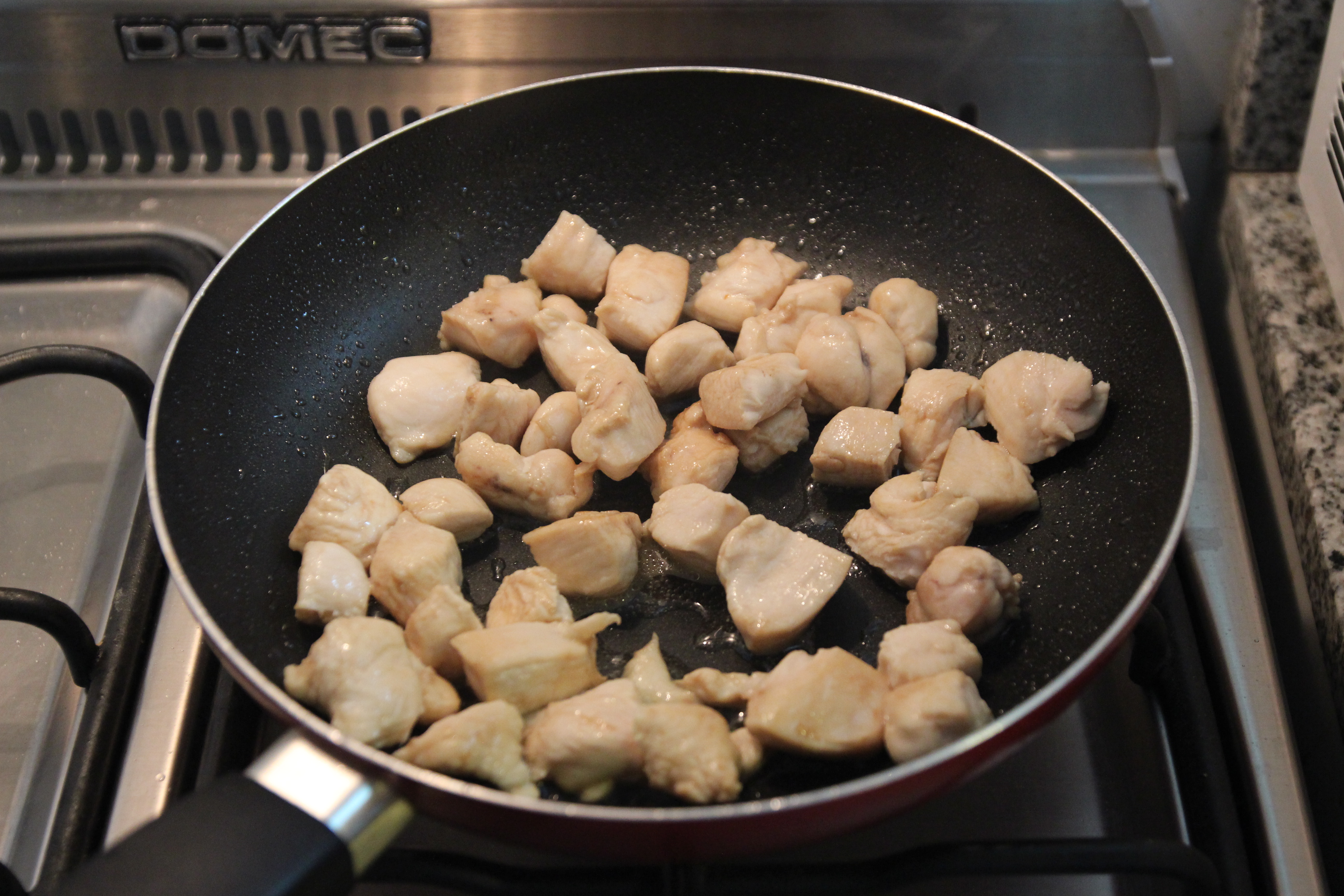 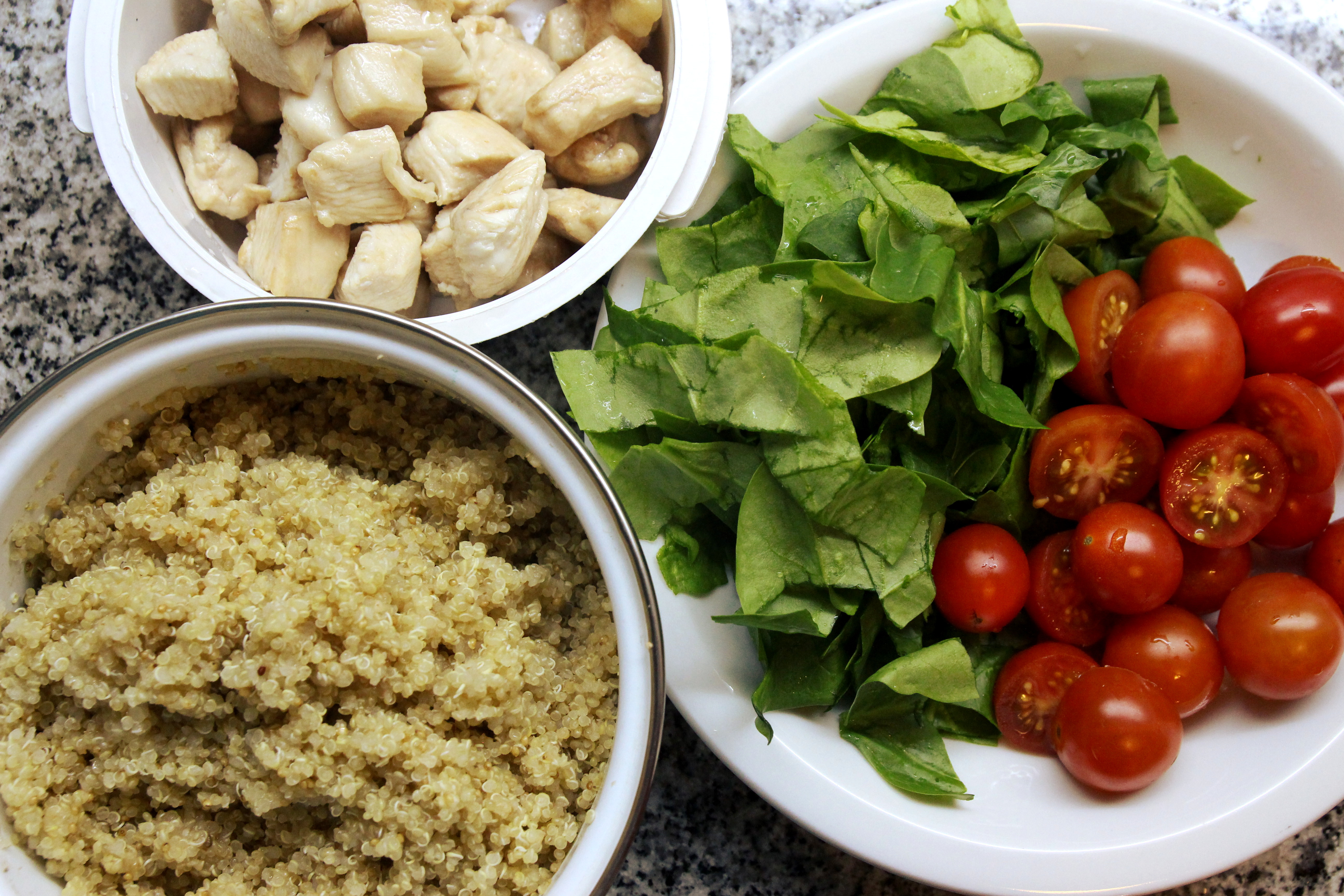 Sprinkle a pinch of salt over and mix well: