When I was a little girl, maybe about 8 or 9, there was a period of time when I’d take out our fanciest place mats and arrange them on the table.

Then atop these sheets I’d place a plate of pasta, mashed potatoes and some toasted garlic bread – my idea of gourmet western food.

You see, in Singapore, where I hail from, and the country which will always be home, although I now only see it once a year, our local cuisine is usually made up of rice, noodles, seafood, and stir-fried pretty much everything. It wasn’t until I was slightly older, maybe in my teenage years, that I got a bit more exposed to western food and started exploring different cuisines. 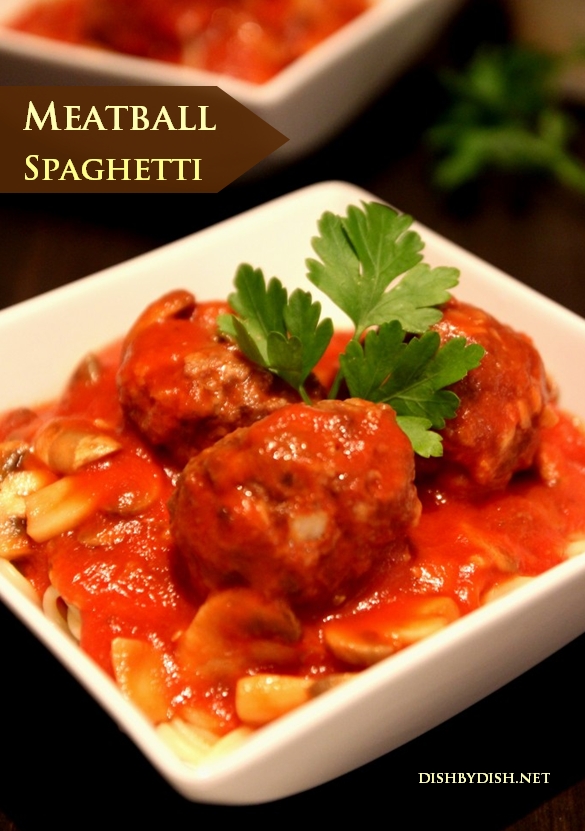 But mostly, what I remember in those years when I was barely ten years old, was the joy of cooking and then serving what you’ve cooked to loved ones, whose appreciation I’d greatly anticipate.

When I grew into puberty and my teenage years begged for attention elsewhere, I left my joy of cooking somewhere on the shelf, covered in dust. Because I was fortunate enough to have a stay-in domestic helper at home, I happily let her do all the cooking, and to be honest, never thought I’d have to step into the kitchen to cook anymore. I thought cooking was quite a waste of time.

But oh, how the tables have turned. 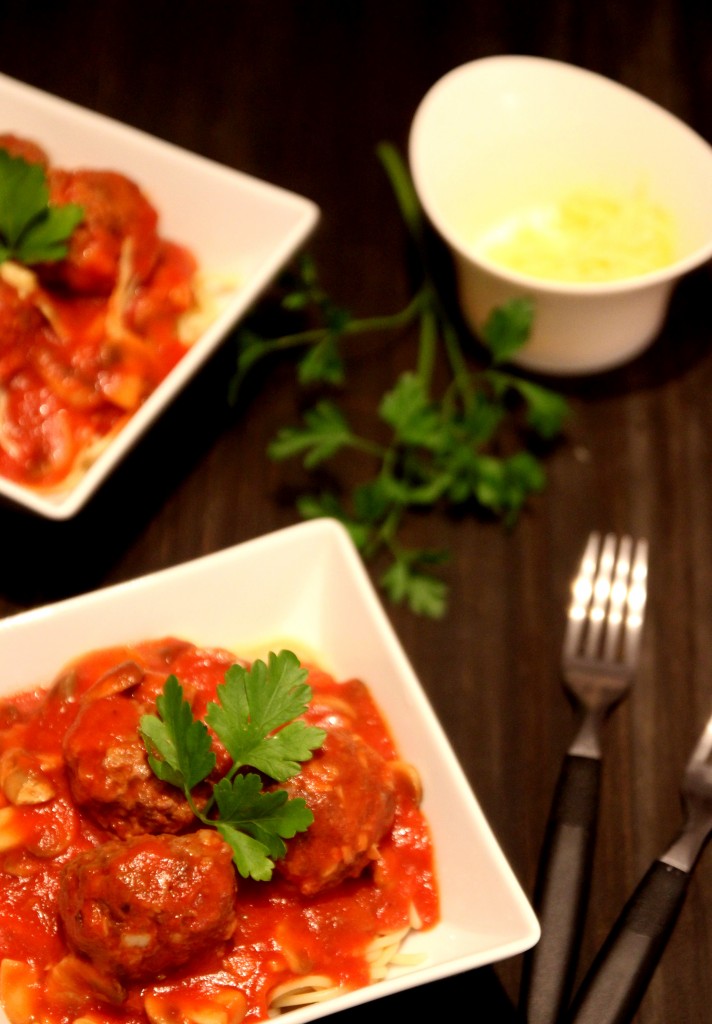 It’s weird how I started cooking again – I ventured into cooking class just two block away from Juan’s family’s house in Argentina because I was worried that the day we moved out on our own, we’d starve to death – since neither of us could cook.

And somehow, between trying to understand culinary jargon in Spanish, a language that is not my own, and attempting to learn what makes a good cook and the basics of cooking, I inevitably found myself drawn to the charms of cooking.

This came in handy because since Juan and I moved to our new apartment this November, we’ve been eating in at least 5 days a week to save some money –money that now goes to rent. 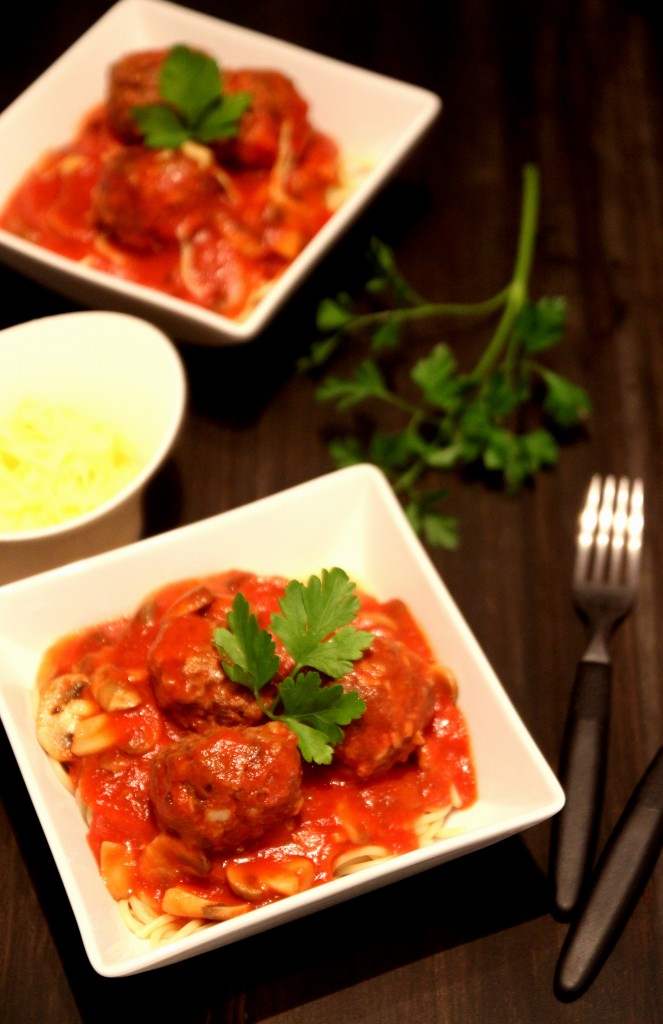 I want to at least challenge myself to cook different foods a few times a week; to jazz up our home-cooked dinners and make the table look a little less boring.

So help me God, and online food blogs.

One of the first dinners we cooked in our new kitchen was a very healthy meatball spaghetti that I’d learnt in cooking classes with Pelusa Molina.

Tell you a secret? Remember the childhood song with the lyrics “And then my poor meatball, rolled out of the door”? The whole time I was cooking I had the song re-playing in my head, and as I made those juicy, large meatballs, I imagined them rolling out of the door.

Ok, trivia aside though, these meatballs are really quite the star. No wonder they even made up a song about meatballs! 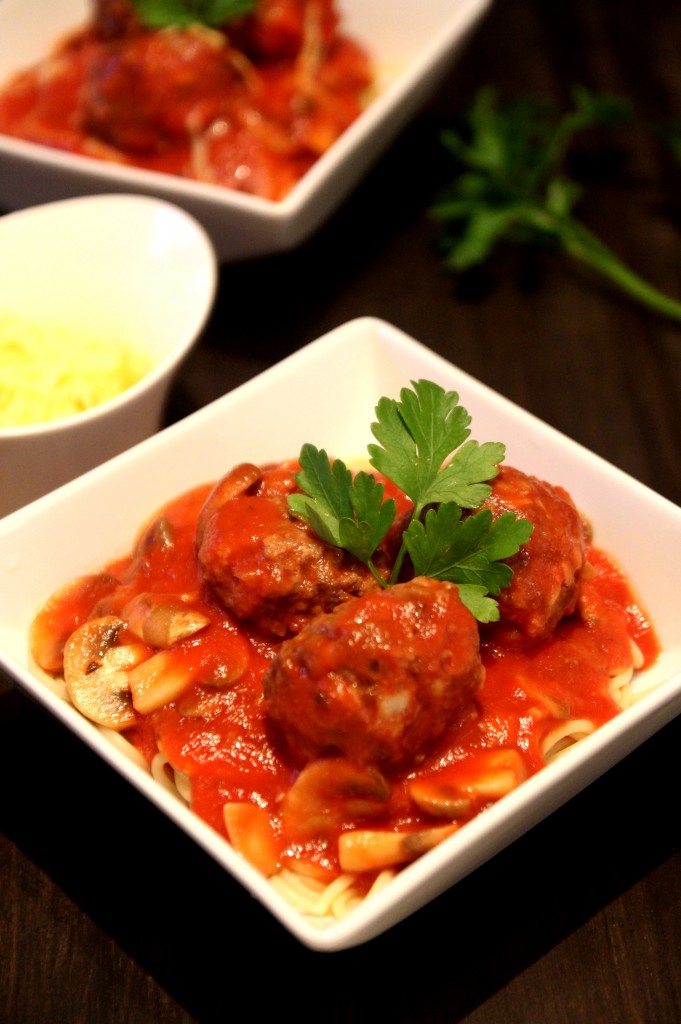 Come stand with me at my kitchen counter for a bit, as I toss all the ingredients on the list into a large, comfortable bowl.

There’s a delirious mix of minced beef, diced onions, torn bread pieces, dried thyme, tomato extract and egg, deftly seasoned with salt and pepper to taste. Watch me as I mix them all together with a wooden spoon, quickly stirring them together until they have more or less mingled well together. I then use my hands (my clean hands, of course) to massage the minced beef mixture until they have been combined well enough to form into meatballs.

I use an ice-cream scoop and scoop out a generous portion of the minced meat mixture, then roll it before both of my palms, cupping it until it becomes an almost-perfect ball. After placing it on a slightly greased baking tray, I repeat the process another seven times, until nothing is left in the bowl. Into the oven the meatballs go, and while they start to brown, I start to prepare the sauce.

I begin by slicing clean, washed button mushrooms thinly, and then sauteing them with just a bit of oil in a saucepan until they’ve turned a beautiful golden brown. Into the pan goes roughly chopped peeled tomatoes; more tomato extract, and finally a dash of dried oregano and thyme. I taste it, then add a bit of salt and pepper to taste. Breathe in the aroma of simmering tomato sauce with me; feel the steam rise to your face; close your eyes and smell the beauty of homemade sauce. When the meatballs have fully browned in the oven, place them in the pan of sauce, and let them finish cooking.

When I’ve had my fill of that delicious aroma, I cook the spaghetti in a large pot of generously-salted water, and when it’s reached the al dente point (which I can tell by throwing a strand of spaghetti against your kitchen tiles and it actually sticks! ) I take out two large bowls, and divide the pasta evenly between both. I scoop meatballs and this beautiful sauce, pouring them over the spaghetti, and sprinkle a little fresh chopped parsley just for kicks.

Now, how about sitting down at my table with me? 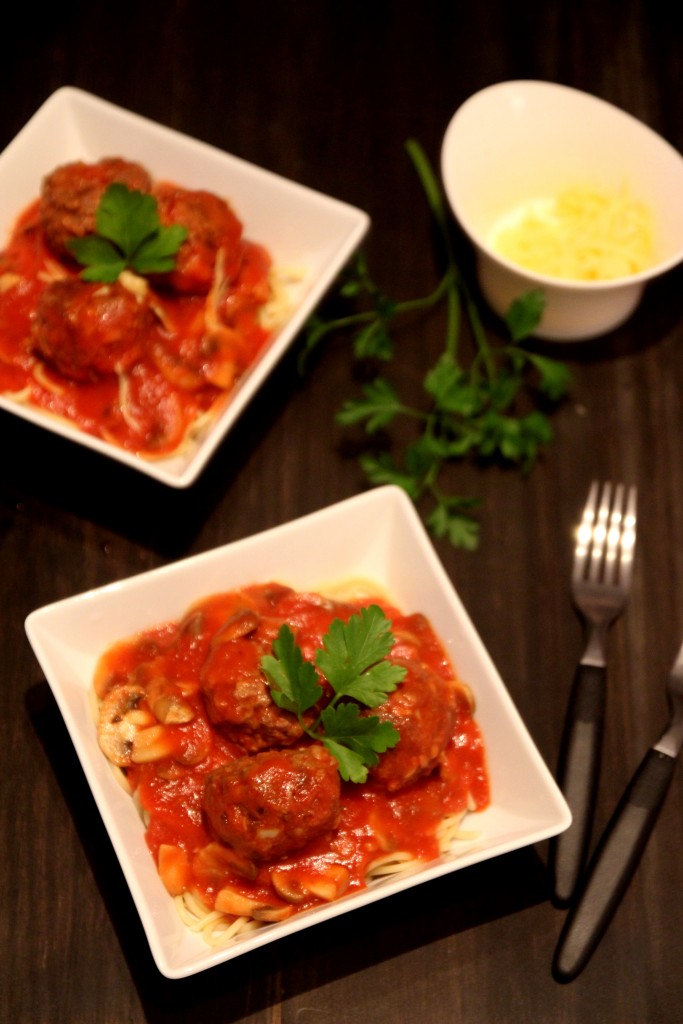 For the sauce and spaghetti:

1) Mix minced beef, bread pieces, diced onions, dried thyme, tomato extract, egg, salt and pepper together, until homogeneous mixture is formed. You can either use a wooden spoon or your clean hands.
2) Using a tablespoon of an ice-cream scoop, form 8 meatballs with the minced beef mixture
3) Place meatballs in a lightly-greased baking tray and cook in oven at 180 deg celcius for 30 minutes until well browned
4) While meatballs are cooking in the oven, slice the button mushrooms, and sauté them in a saucepan with a bit of oil
5) Add the chopped peeled tomatoes, the tomato extract,  and about ½ cup of water to the mushrooms, and let simmer over low heat
6) Season with thyme, oregano, salt and pepper to taste
7) Once meatballs are cooked, transfer them from oven to the saucepan where the sauce is being cooked, allow meatballs to cook a little bit more
8) Cook spaghetti according to package instructions
9) Serve spaghetti topped with meatballs and sauce, and garnish with chopped fresh parsley