×
You are here: Home / Appetizers / Rösti

Doesn’t it amaze you how a simple ingredient like the potato can be used to make such a wide variety of dishes?

From mashed potatoes on top of a Shepherd’s Pie, to crispy golden French fries, to baked potatoes with sour cream and bits of fried bacon, to being boiled in chunks and served with chicken curry, the potato is a marvelous vegetable.

Each country and continent has perfected a different method to use and present the potato.

I’d like to introduce to you the varient which originated in Bern, Switzerland – the Rösti -a dish I finally learnt how to make this week at Pelusa Molina‘s cooking class. 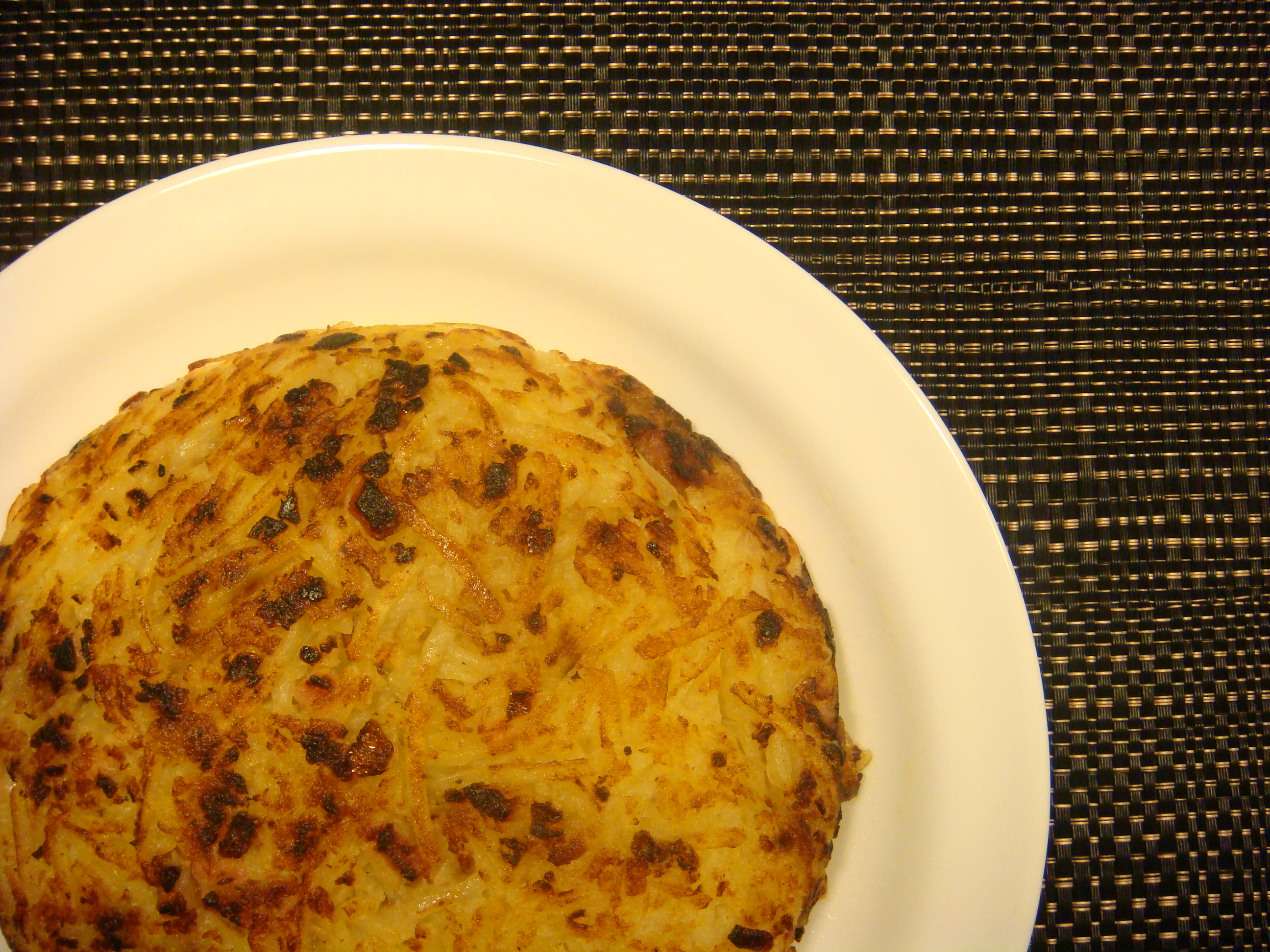 Crispy, golden brown Rösti…! Are you drooling yet?

I’ve never been a huge fan of potatoes, since we eat more rice in Asia than potatoes, but the Rösti always has a soft spot in my heart. Perhaps it’s because it reminds me of the restaurant Marche that we had in Singapore, a place where I used to meet up with friends, and a place deeply rooted in the memories of my teenage years.

Rösti (often spelled Röschti in Switzerland according to the Swiss German) is a Swiss dish consisting mainly of potatoes.

According to Wikipedia, It was originally a common breakfast eaten by farmers in the canton of Bern, but today is eaten all over Switzerland and also in many restaurants in the Western World. Many Swiss people consider Rösti a national dish.

Rösti is made with roughly grated potato, either cooked or raw. Depending on the frying technique, butter or another fat may be added (and usually salt and pepper). If not, oil will be used for the frying. The grated potatoes are then shaped into rounds or patties, which come in different sizes, usually measuring between 3–12 cm (1 to 5 inches) in diameter and 1–2 cm (0.5 inch) thick. Often Rösti is simply shaped inside of the frying pan. They are most often pan fried, but can also be baked in the oven. Although basic Rösti consists of nothing but potato, a number of additional ingredients are sometimes added, such as bacon, onion, cheese, apple or fresh herbs. This is often considered to be a regional touch.

According to Pelusa, the secret is in chilling the potatoes after partially cooking it in hot water.

This is so that when you grate the potatoes they are firm and come out like shreds of cheese. I’d trust her advice, because the Rösti we made in class was spectacular.. divine..mouthwateringly beautiful..

When sliced into half.. 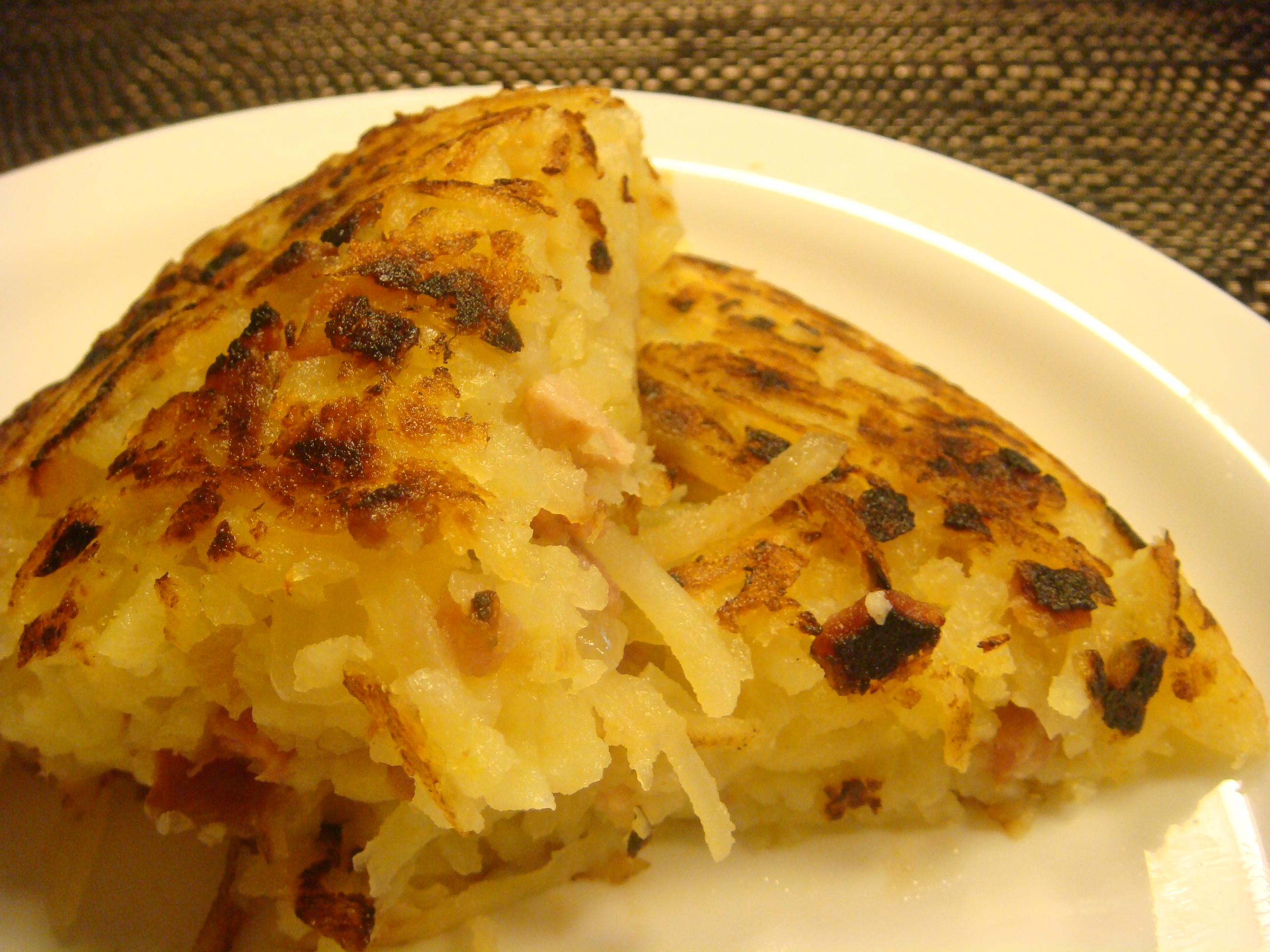 1) Boil the potatoes in water (with their skins) for 15 – 20 minutes (until cooked but ensuring the middle remains firm)
2) Chill in the fridge for at least 12 hours
3) Mince onion finely and cut bacon into small pieces (as small as possible)
4) In a pan, sautee onion and bacon bits with butter, adding salt & pepper to taste
5) Once onion and bacon bits are cooked, set aside
6) Peel boiled potatoes (from steps 1 & 2) and grate them into thin slices
7) Mix shredded potatoes and onion and bacon bits evenly together
8) In a small or medium-sized pan, melt some butter on high heat, and add a generous helping of the mixture in Step 7, until the entire surface is covered
9) Use the back of a spoon to press down on potatoes until compacted
10) Melt some butter along the sides of the pan
11) Once the rösti unsticks from the pan and is golden brown on the bottom, flip it over
12) Cook until the other side is golden brown and crispy

*Note that when you flip the rösti over, cover the pan with a plate slightly larger than the pan, and flip it over, so the rösti does not break.

« Of Birthdays and Celebrations, of Friends and Life
Why do I photograph food? »