×
You are here: Home / Brunch / Sunday Brunch at Pani Café

I spent this weekend wandering the streets of Palermo instead of cooking, which I usually try to dedicate some time to.

Everywhere in Buenos Aires, and especially in the heart of the Palermo neighborhood, pretty bohemian-themed cafes have been blossoming and sprouting up just like the plants and flowers in the Spring.

Each corner and every turn brings a new pleasant surprise whenever Juan and I explore the city in the weekend.

I must admit that we usually stick to exploring the neighborhoods that we are more familiar with, such as Palermo, Recoleta and Belgrano, to a lesser extent. Since we live in the Palermo neighborhood, and just 10 blocks (around 1 km) from where the restaurants and chic boutiques thrive in an abundant cluster, we tend to fall back on Palermo as our default eating/shopping/entertainment option. We also head there largely also because this Soho-style neighborhood appeals greatly to the younger crowd, whose tastes have steered heavily towards trendier shops with original design.

Yesterday, the 21st of October, was Mother’s day (Día de la Madre) in Argentina (I know it’s in May for other countries – weird isn’t it?), so we went for a Sunday afternoon brunch with Juan, Fran and Susana.

We usually go to Oui Oui, a French-style cafe whenever we are in the mood for brunch, but yesterday we decided to test the cafe next door, whose beautiful interior decorations and whimsical charm had me snapping everything in sight.

Pani was no exception to the norm – it is among the many new cafés which have set up shop in this Porteño neighborhood with a menu aimed at younger folks with a tendency to have brunch instead of lunch. This idyllic cafe is located at Nicaragua 6044, a serene street ideal for a chill Sunday brunch. To be honest, I’ve passed by Pani so many times when I head to Oui Oui for brunch, but somehow we were never inclined to enter before yesterday.

Entering Pani feels like you’re entering a new fantasy world, where the only problem you had was to decide which table was prettier to sit at, and which breakfast or brunch menu would best satisfy your craving for everything. (Forgive me for  this first-world dilemma). Pastel-colored walls decorated with lace artwork, aprons, hand-painted mugs and colorful flowers transported us into a whimsical carefree mood, temporarily removing us from the smog and troubles of the city.

Pani also has a rather large selection of breakfast and brunch items on its menu, so we spent quite a lot of time pondering over what to eat. (That’s usually my problem – give me more than 10 items on the menu and I end up wishing I could try everything, and usually just end up with the same old dish – in this case, an omelette).

I’m so glad I followed my intuition and decided to take my camera with me for brunch yesterday, so I didn’t have to miss out on capturing just that little bit of Pani’s charm.

Follow me and enter this charming little world with me..

Its large variety of baked breads and other pastries:

A collection of aprons & tablecloths that were available for sale:

A wall decorated with a newspaper collage:

Which was facing the kitchen: 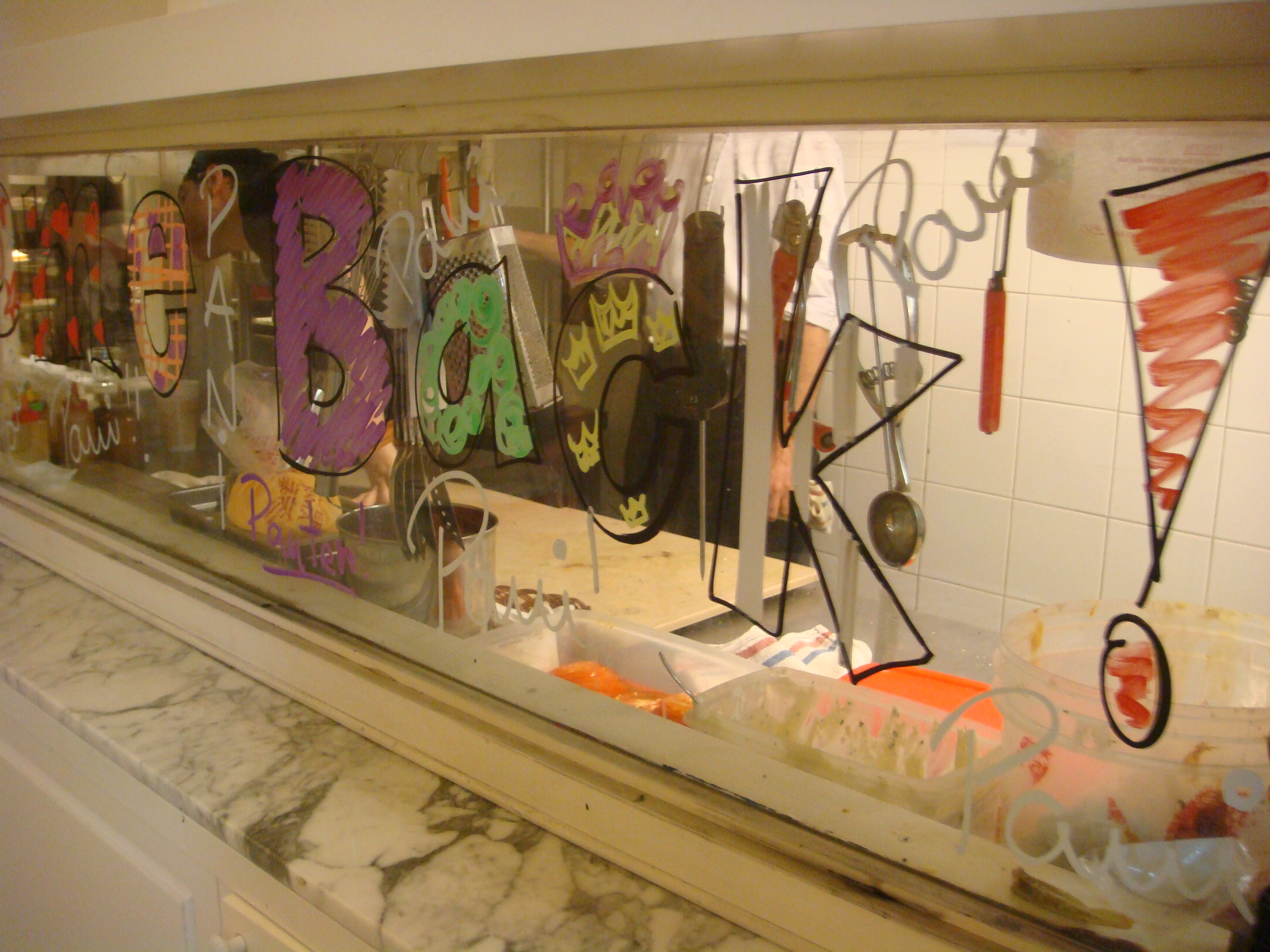 The terrace on the upper deck:

With a miniature gardening corner:

With Susana in the powder room: 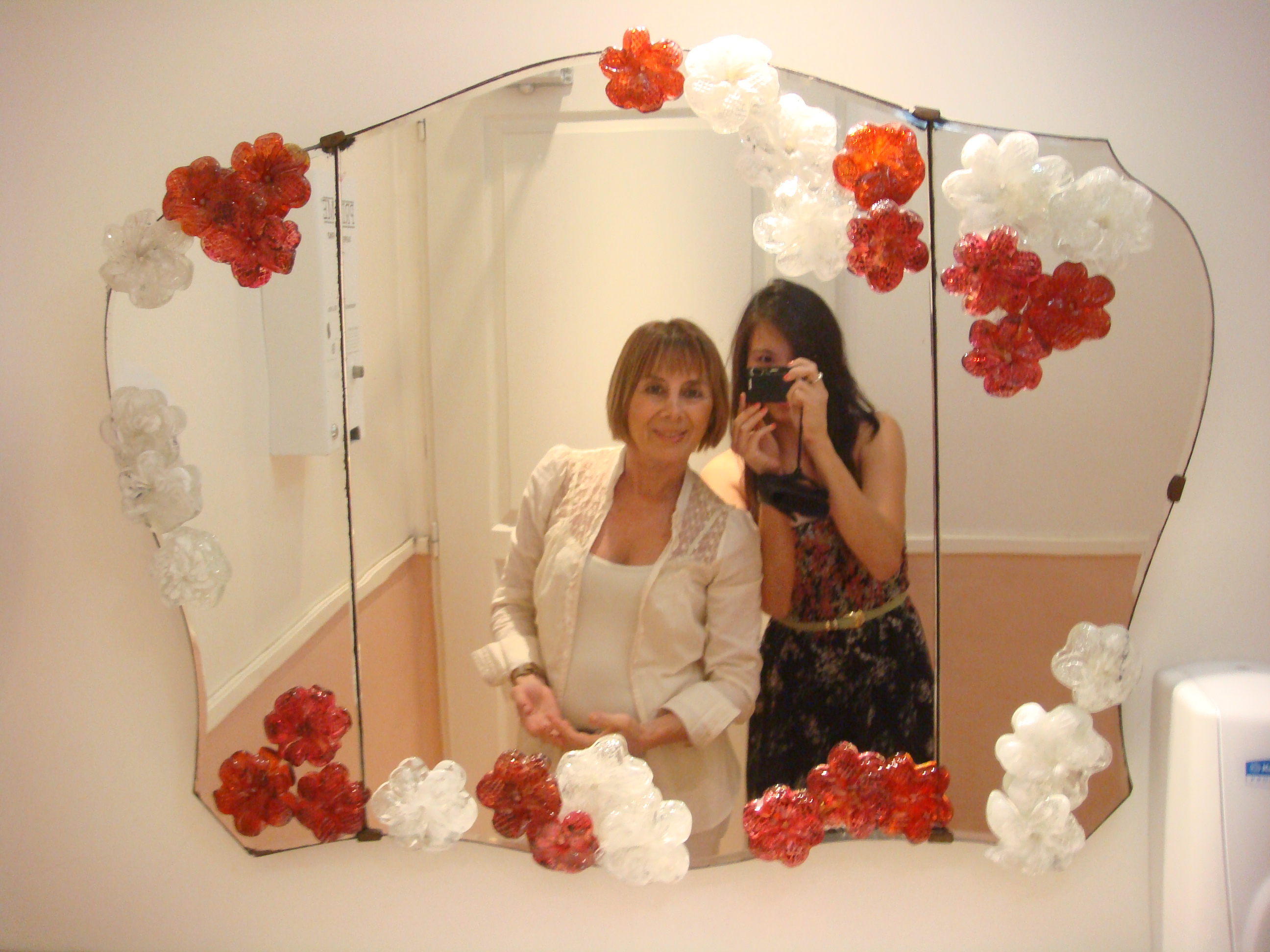 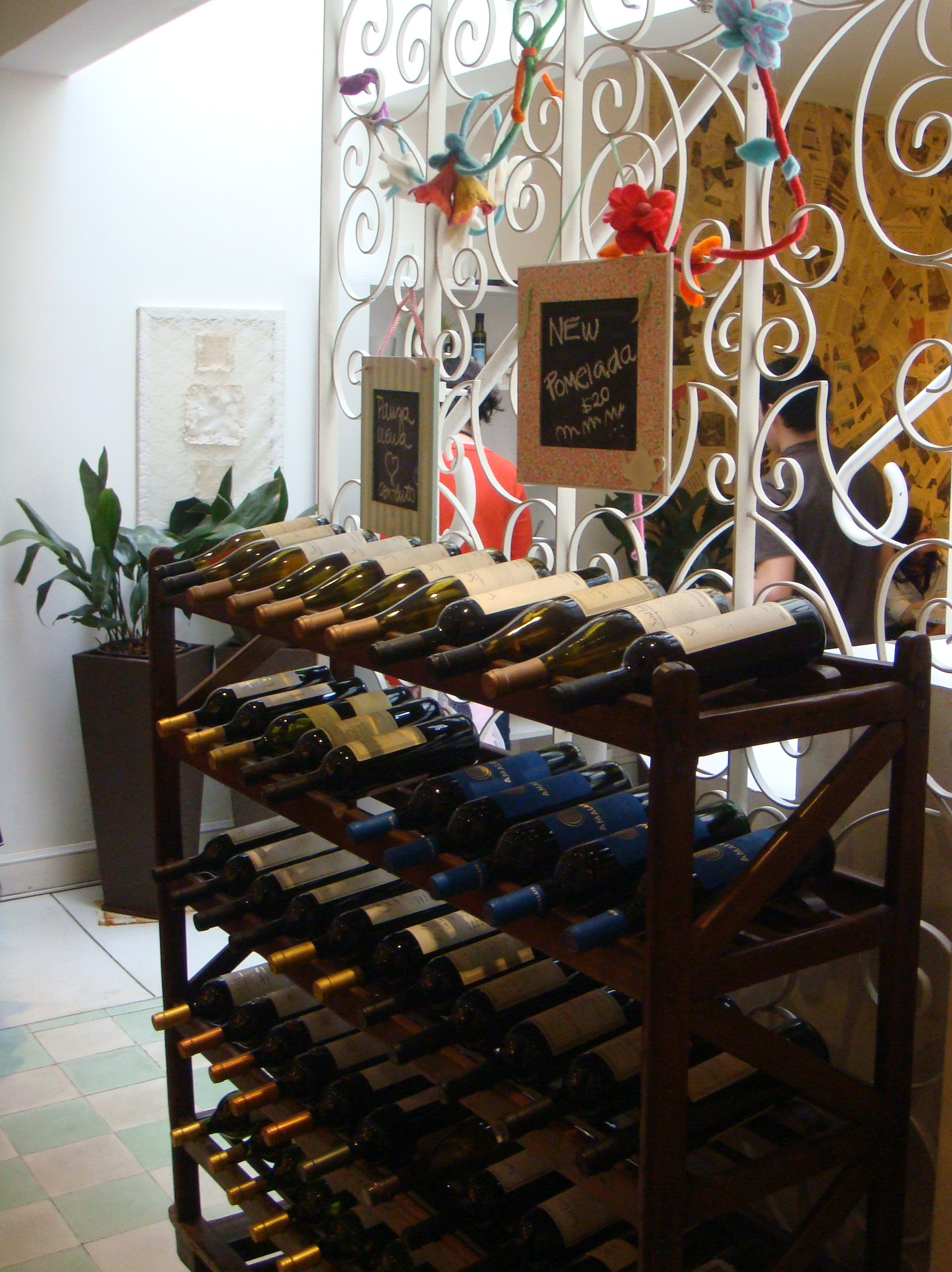 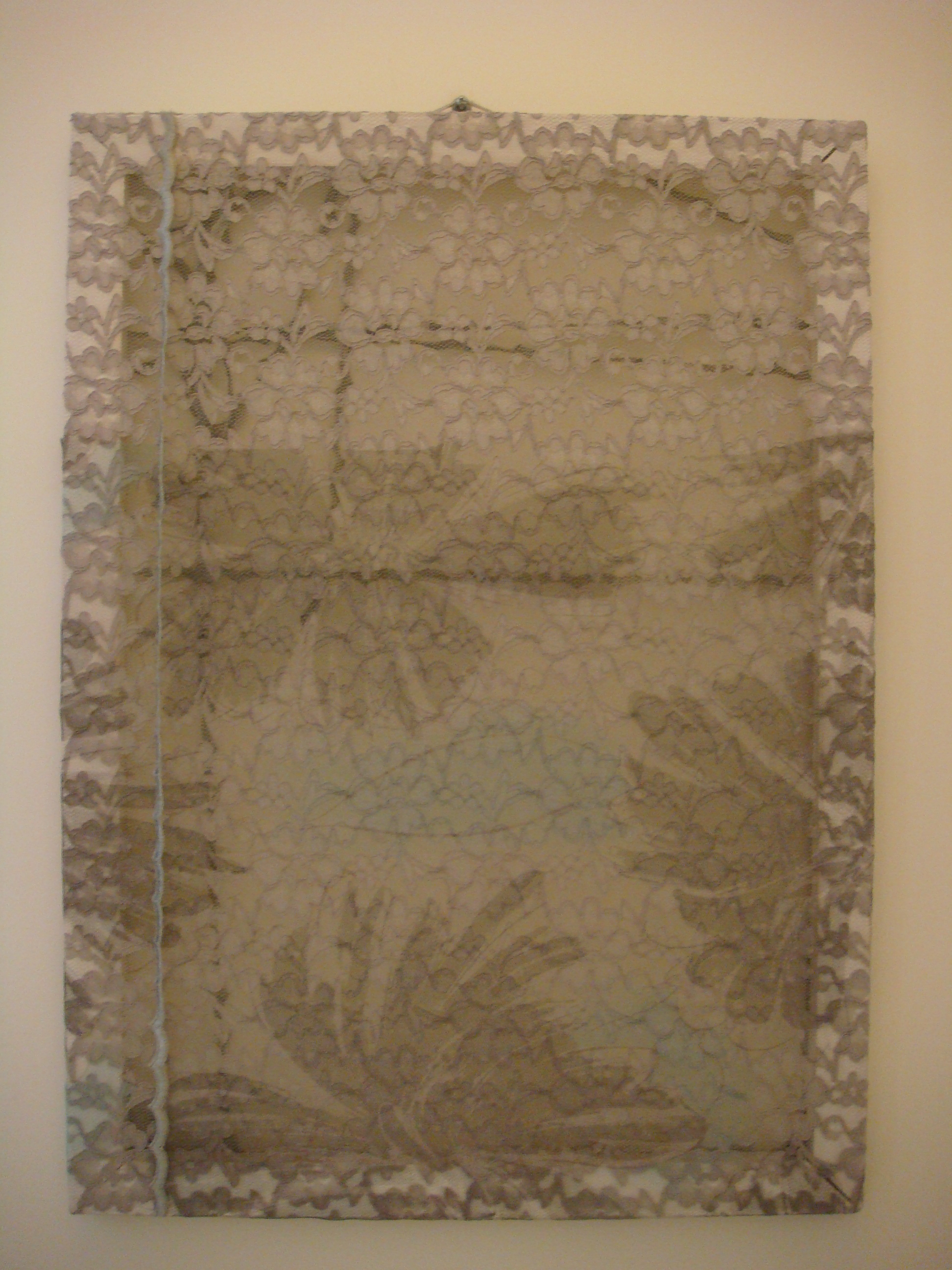 Alright… now that I’ve finally finished raving about how cute and pretty everything was in Pani, I can finally move on to what we had for brunch.

As I mentioned earlier on, we were spoilt for choice with such a wide menu range. There were sandwiches, salads, sweet and savory waffles, crepes, breads, pastries, and plenty of different types of eggs to choose from.

The back of the menu (asking that customers wait patiently for food to be served in its best condition): 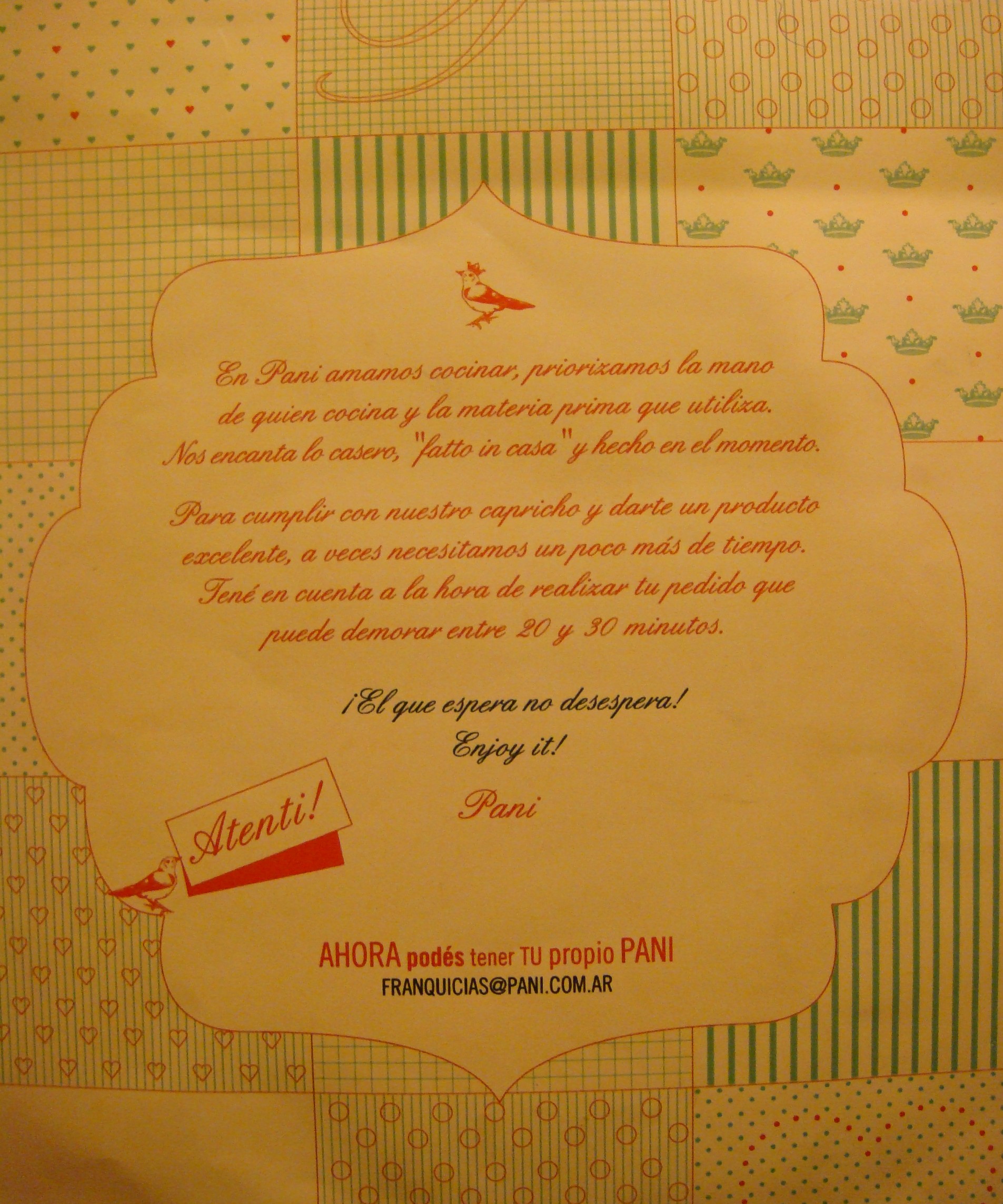 I fell back on a typical brunch dish – the trusty omelette, with onions, mushrooms and ham, together with a side of smoked salmon.

Juan’s choice was a little more interesting. It was the “Club Waffle” which came complete with beef, lettuce, tomatoes, ham, cheddar cheese, a fried egg, as well as a side of fries. (Like a hamburger with waffles). Fran and Juan shared this together with another omelette. 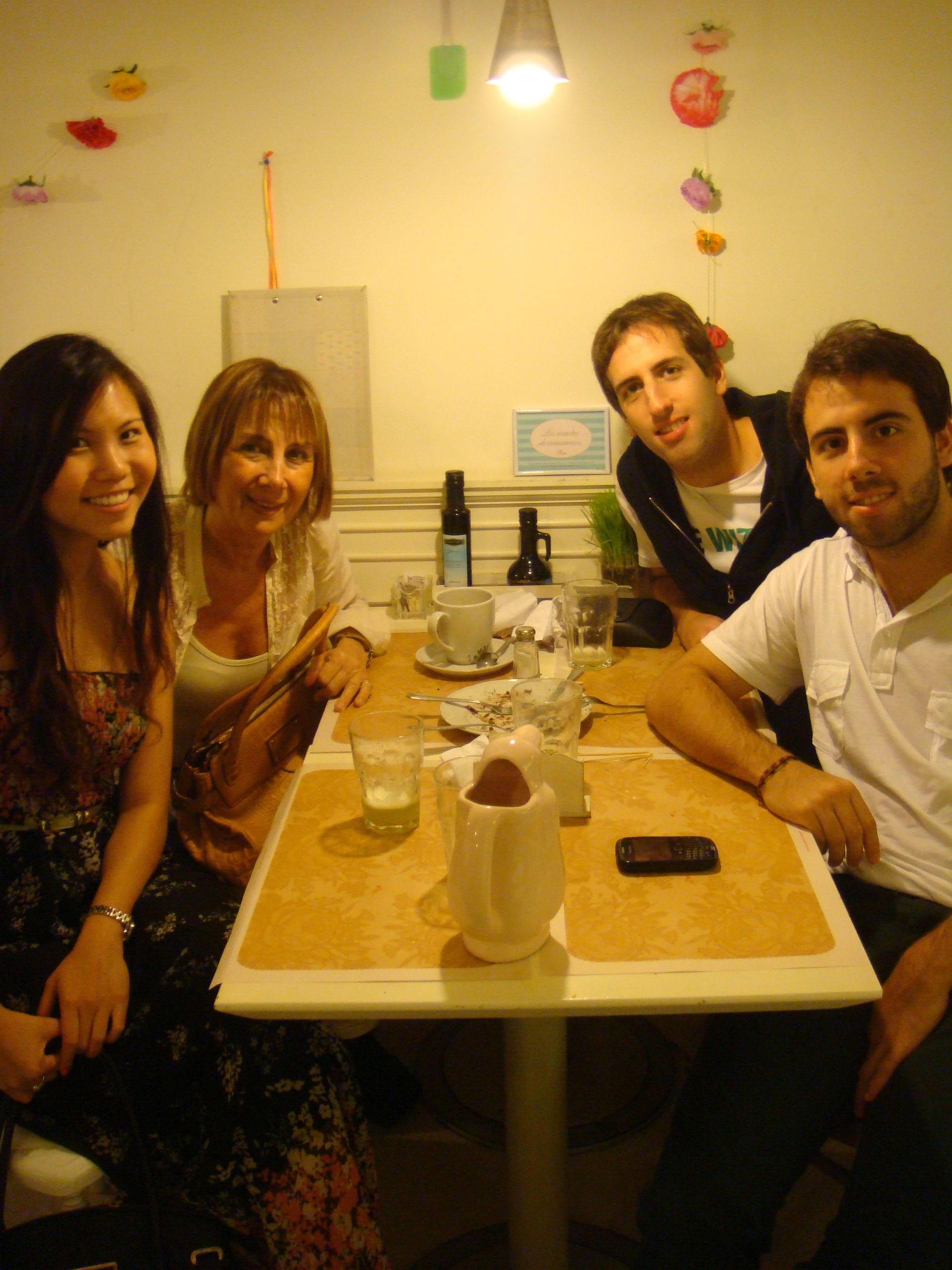