When I was a little girl, my family would often meet up with Aunty Adeline, Uncle Eric, Shawn and Gracia for dinners (in fact my family still does that, with the only exception being that I am now in Argentina instead of Singapore). Now, you have to understand that my family (especially Uncle Eric) loves to eat. We will go to great lengths to find good food to eat, whether it is in Singapore, Japan, Korea or Hong Kong. So it suffices to say that most of my childhood memories consisted of delicious steaming bowls of wanton noodles, or spicy bak kut teh in the middle of the night, or simply visits to a particular dessert of cake shop to nibble on something sweet after dinner.

One of the desserts I ate the most when I was young was Tiramisu. It remains among one of my favourite desserts till this day, for the memories it brings me, as well as for its sinfully delicious and creamy texture. For those to have never tried Tiramisu before, Wikipedia states the following: Tiramisu is an Italian cake and dessert. It is made of ladyfingers (Italian: Savoiardi) dipped in coffee, layered with a whipped mixture of egg yolks and mascarpone cheese, and flavored with liquor and cocoa.The recipe has been adapted into many varieties of puddings, cakes and other desserts.

According to Pelusa Molina, Tiramisu has become increasingly popular in Argentina over the past few years, and as I mentioned in a previous post, it has even succeeded in popularity compared to more traditional desserts such as Tarantela and perhaps Natilla.

A month ago during Pelusa Molina’s cooking class, she taught us how to make Tiramisu. It was absolutely delicious, but there was a little problem. It required the use of an electric beater to beat the egg whites (for the creation of merengue). I didn’t have an electric beater then, and it was only until yesterday, when Juan’s mum found her 30-year old totally brand new electric beater still wrapped up in its packaging, that I decided I would finally get down to making Tiramisu.

Here’s Pelusa’s recipe for Tiramisu. It was so damn lip-smackingly delicious. OMG. That’s how incredibly gloriously beautiful it was. And, it really wasn’t that impossible to make. Here’s how.

1) In a metal bowl, mix egg yolks with icing sugar and rum, and beat well in a pot of boiling water (but not till it becomes too solid)
2) Mix the egg-yolk mixture in step 1 with the mascarpone cheese until homogeneous mixture is achieved
3) Using the electric beater, beat the egg whites together with 40g of sugar to get merengue
4) Unite the mixtures from step 2 and 3 until homogenous (this gives you the cream)
5) Mix 1 cup of sugar and 1 cup of water together and heat over low fire to get sugar syrup
6) In a bowl, mix the coffee, coffee liquor and sugar syrup together
7) Dip the vanilla ladyfingers in the coffee mixture and arrange them in a rectangular bowl
8) Spread half the amount of cream made in step 4 over the layer of vanilla biscuit ladyfingers
9) Repeat steps 7 and 8, ending up with a final layer of ladyfingers
10) Chill for at least 4 – 6 hours before sprinkling cocao powder over the cake

Some of the ingredients: 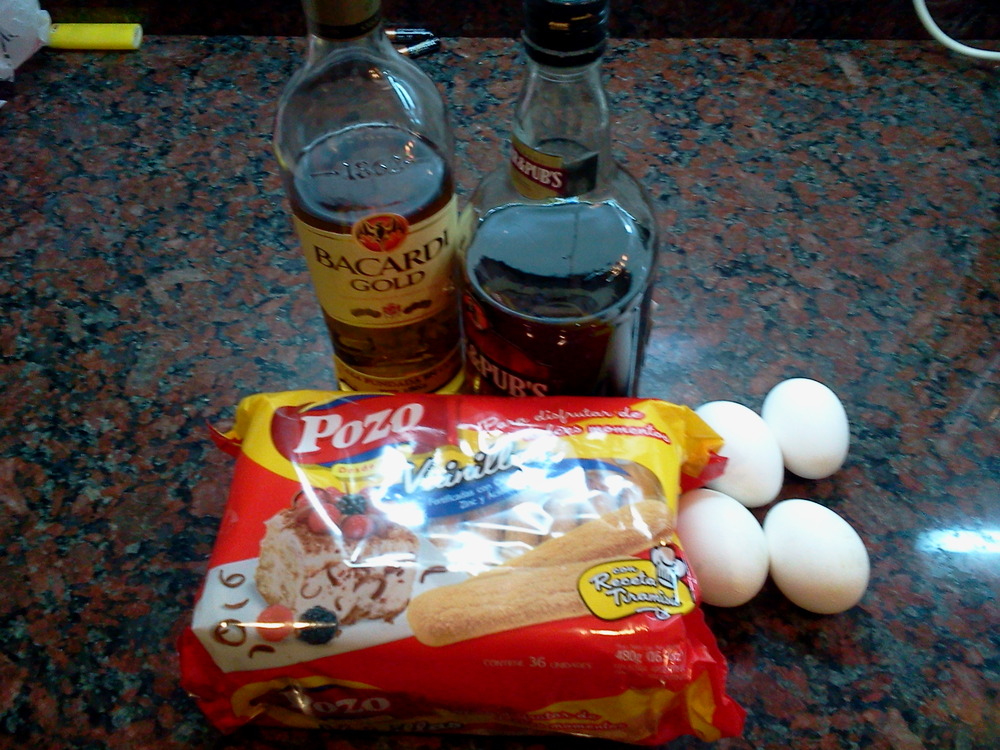 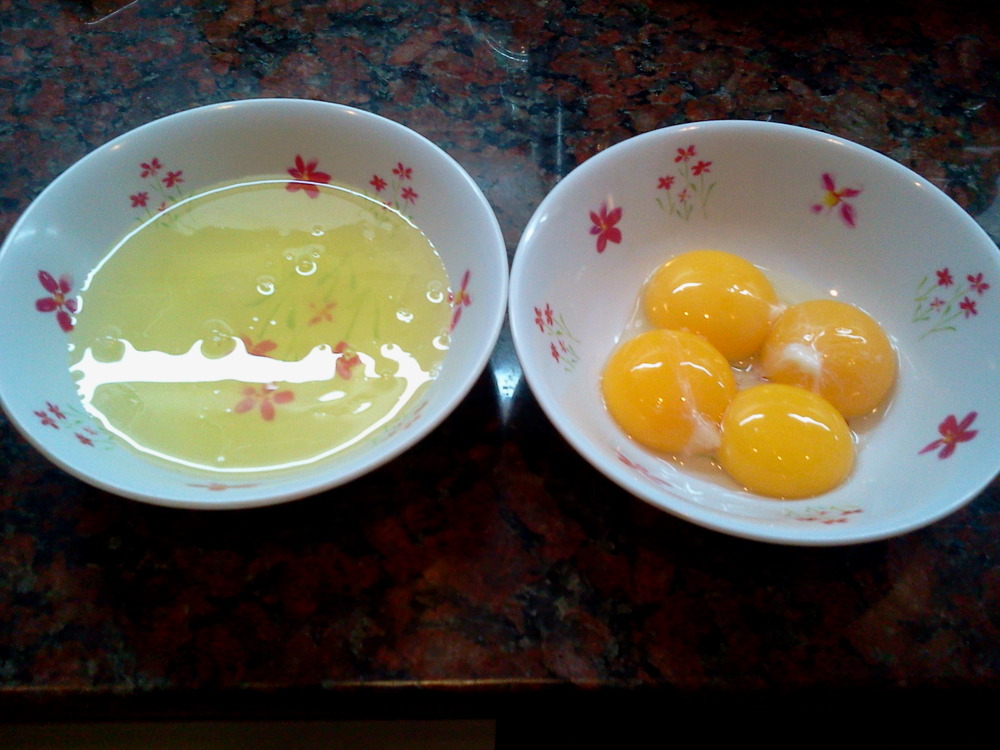 Beat egg yolks, icing sugar and ron in a metal bowl placed in a pot of boiling water: 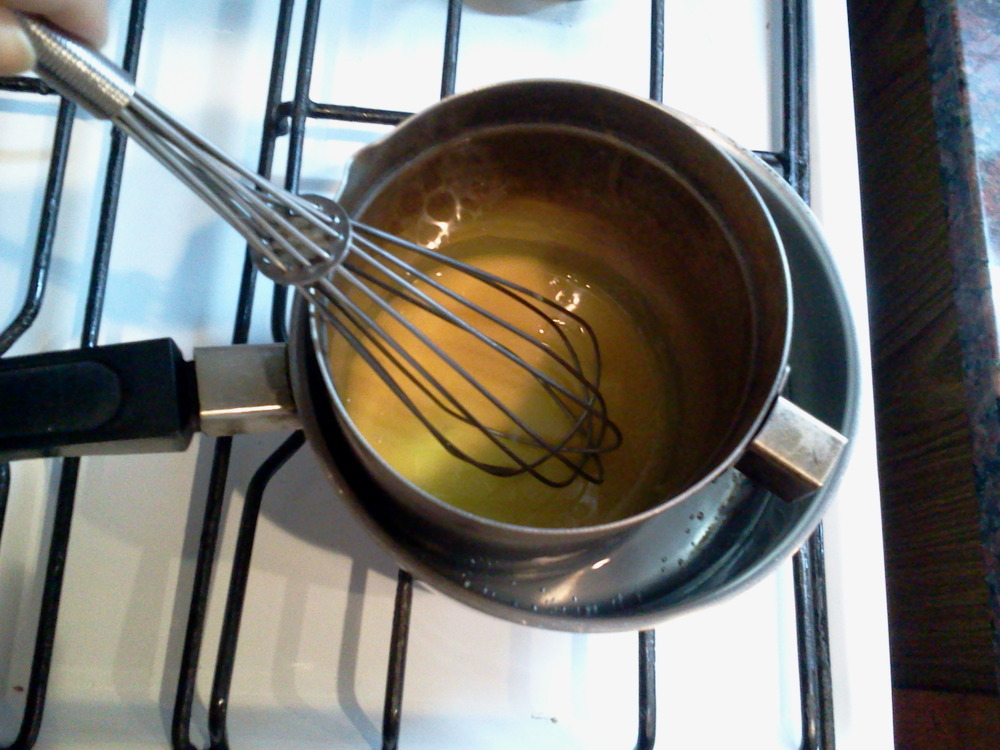 After egg yolk mixture is cooked: 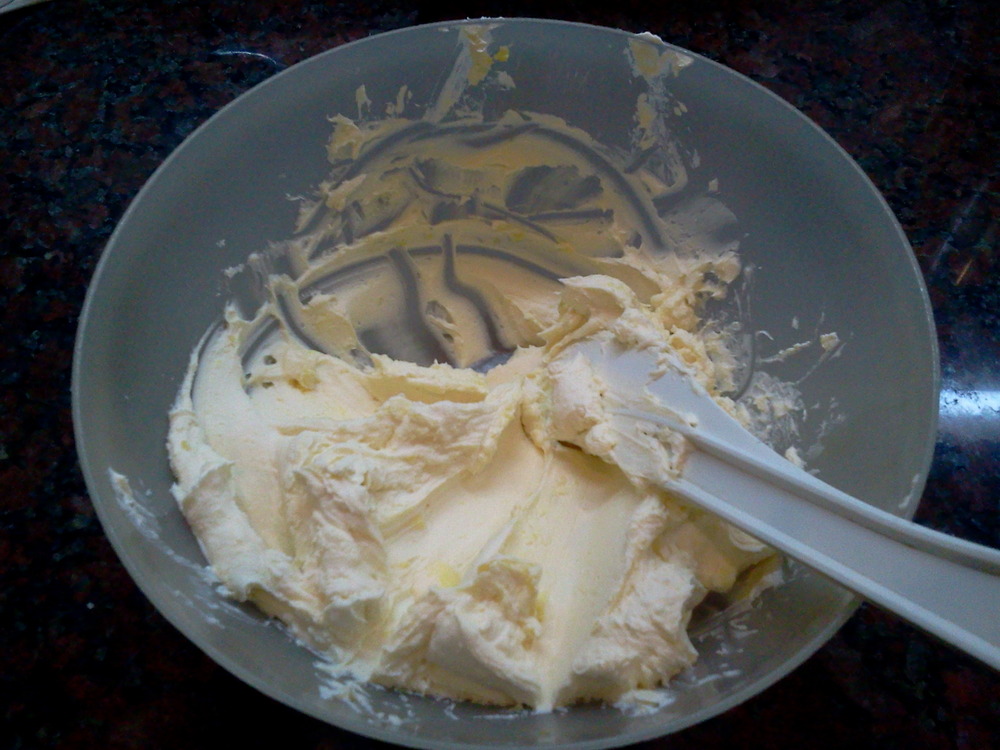 Use an electric beater to beat the egg whites and sugar to form merengue: 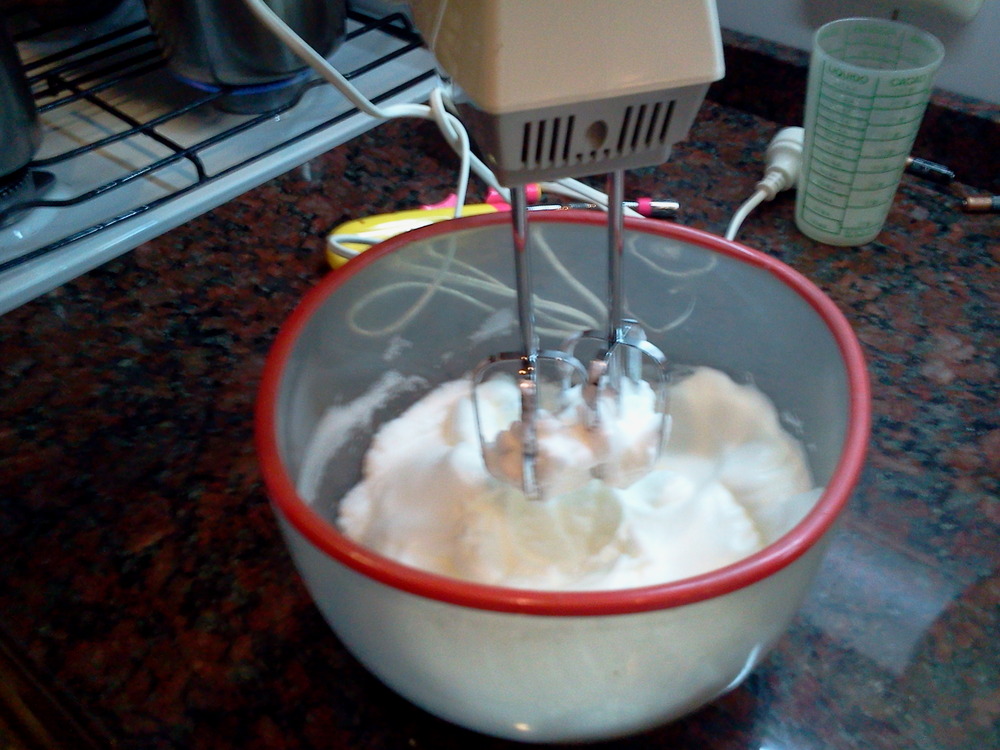 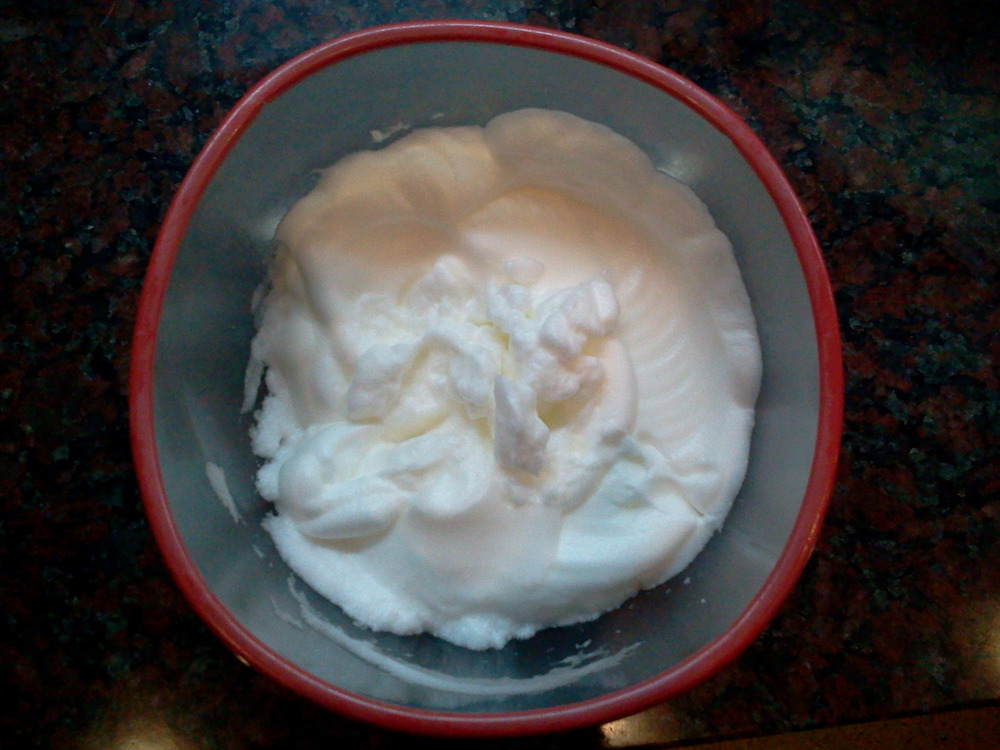 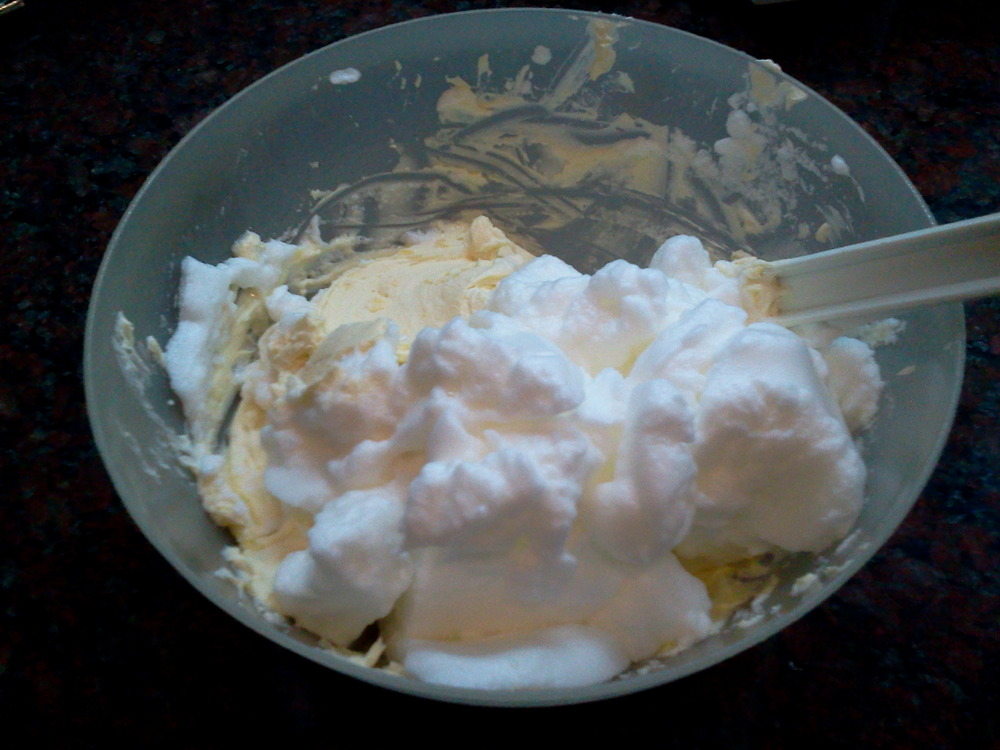 To get the cream: 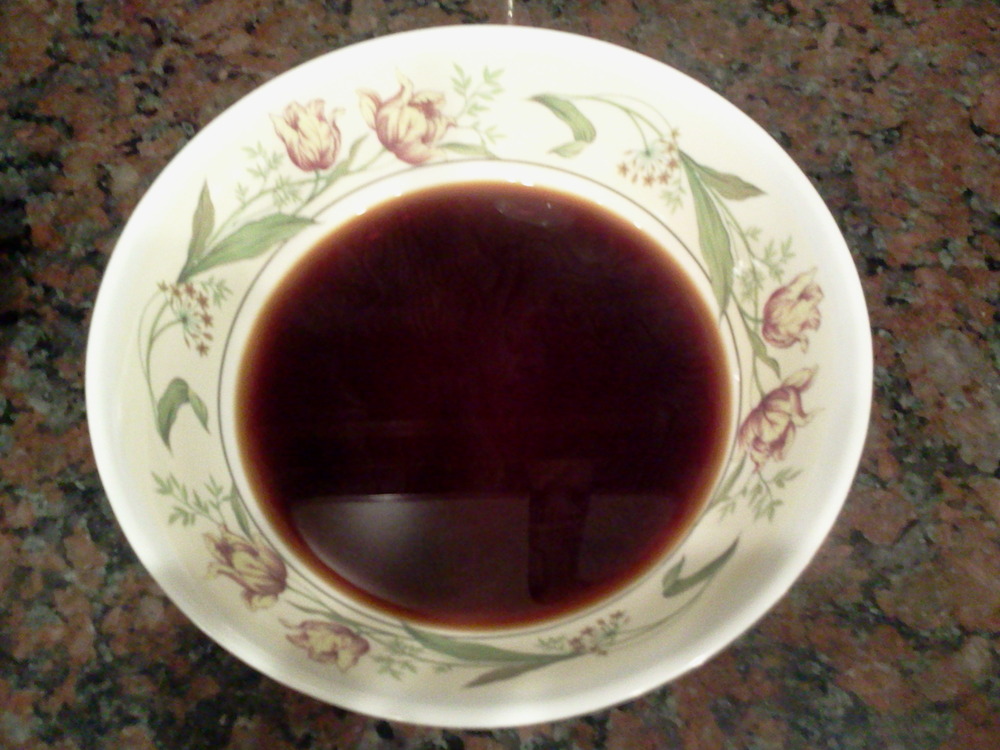 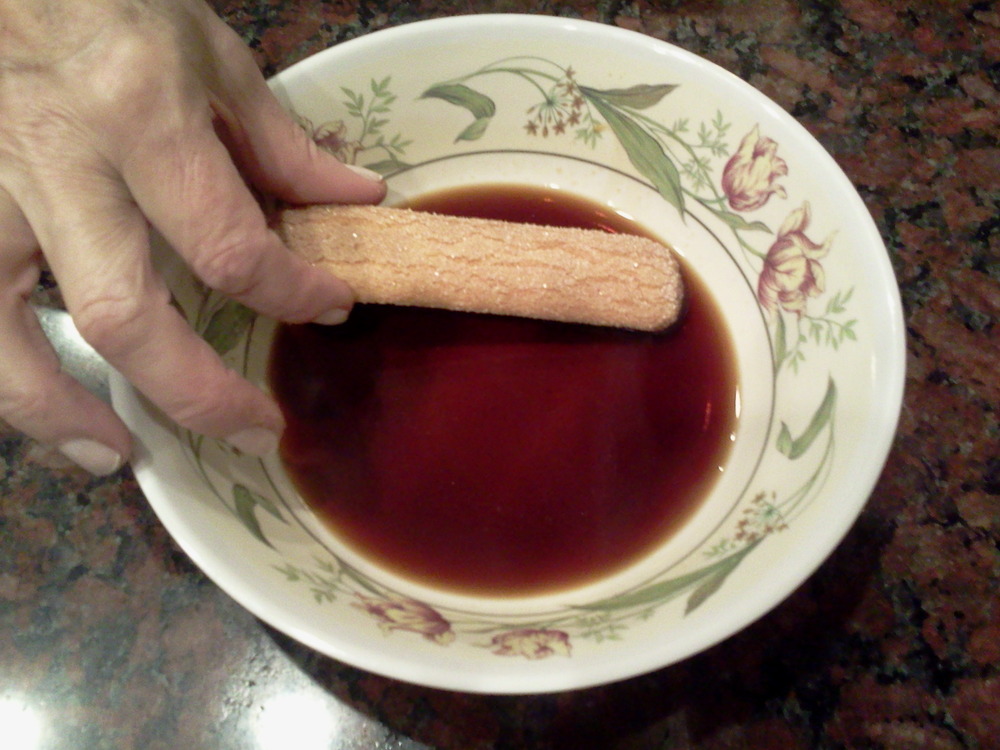 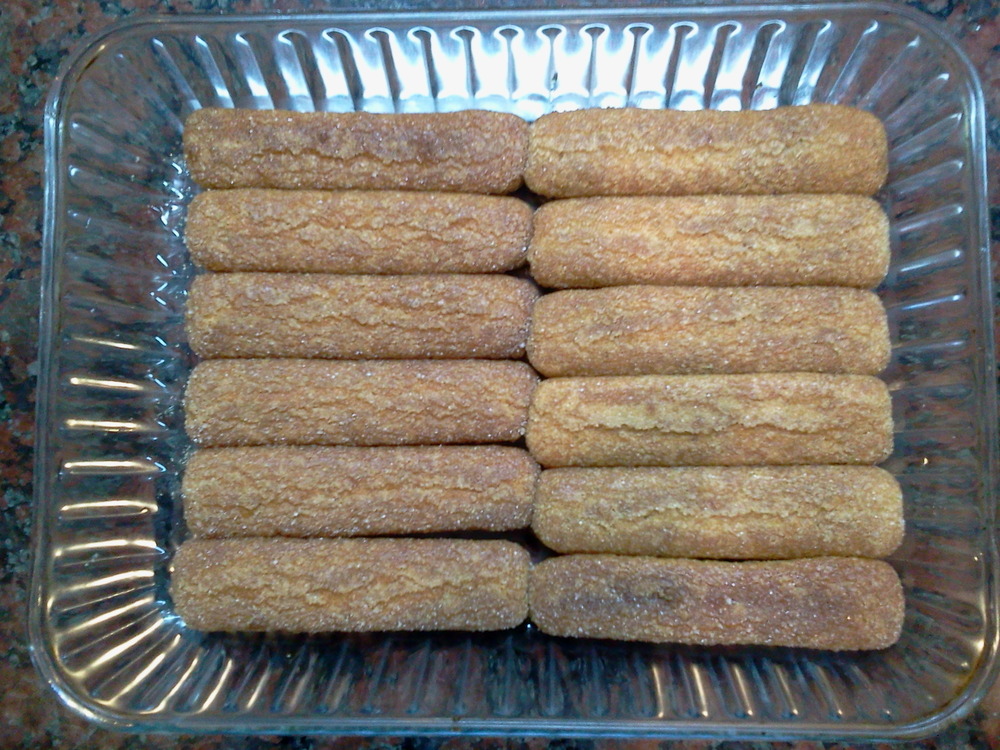 Spread cream over the first layer of vanilla biscuits: 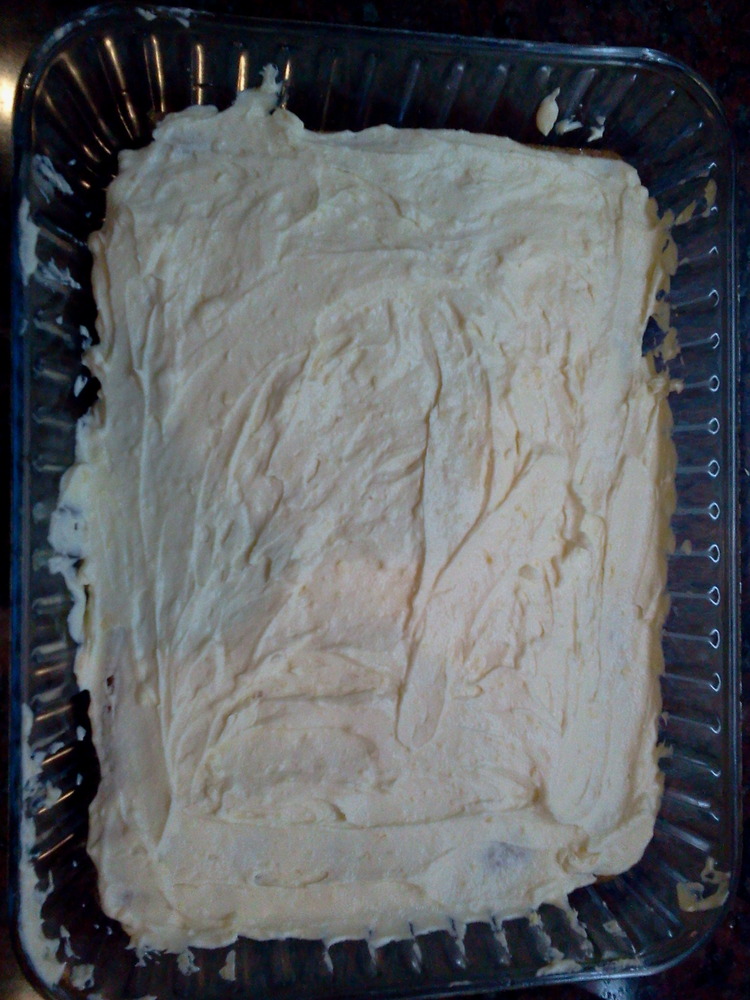 Repeat with more layers of biscuits and cream until you end with a final biscuit layer: 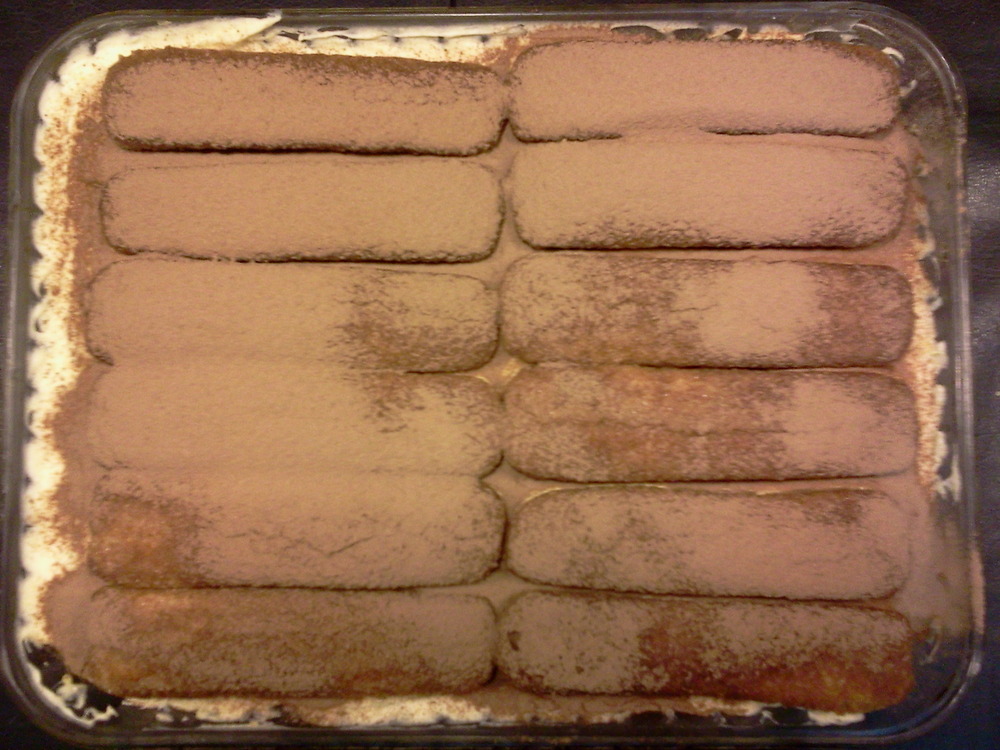 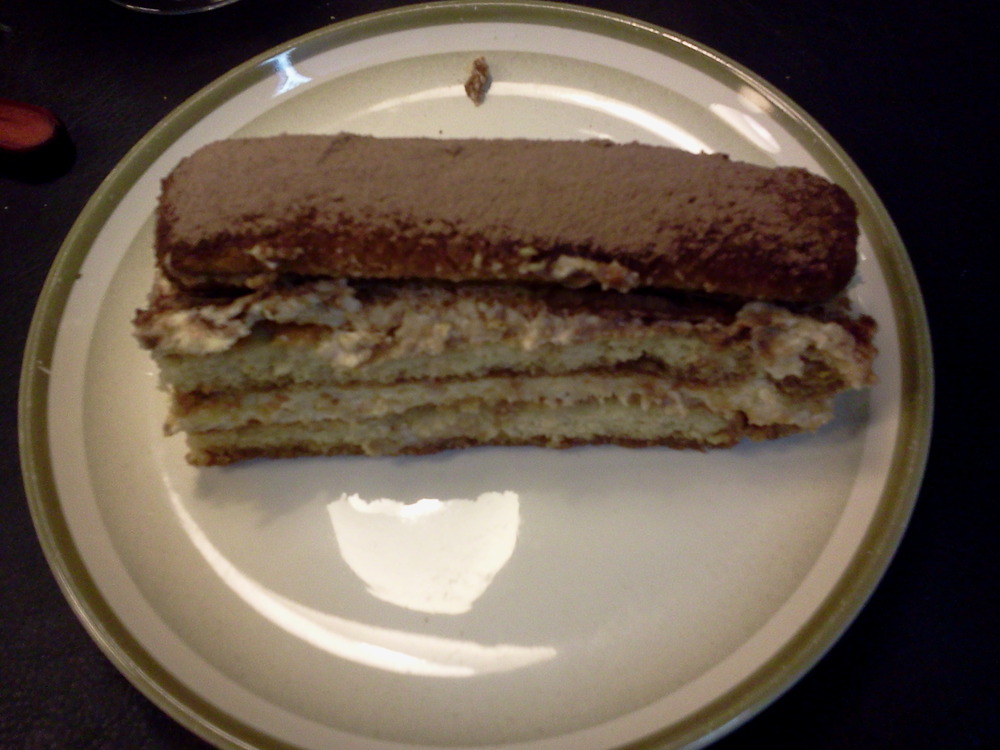 « Tip of the Week: Why Baking is Healthier than Deep-Frying & How to Get Used to It
Raisin & Walnut Granola Bars »