Made with almond flour to keep the recipe grain-free and gluten-free, these honey lemon shortbread are unbelievably easy to make, and turn out deliciously crispy!

A great recipe that’s perfect for the holiday season, these gluten-free shortbread cookies are a must-have on your cookie platter!

Why This Recipe Works:

Here’s an overview of the ingredients required for these almond shortbread cookies.

(For exact measurements and quantities, please scroll down to the recipe card at the bottom of this post.)

How to Make Honey Lemon Shortbread (Step by Step)

Sift the almond flour, tapioca flour, and baking powder in a large mixing bowl. Mix in the unsweetened shredded coconut and whisk well to combine.

Add the vanilla extract, baking powder, salt, honey and melted vegan butter into the large bowl with the dry ingredients, mixing well until you get a dough with a sandy texture.

Flatten the dough into a round disc and wrap in plastic wrap, then chill in the refrigerator for 30 minutes to harden slightly.

Preheat the oven to 325F (165C) and arrange the oven rack to the middle position. Line a large cookie sheet with parchment paper or a silpat (silicone mat).

Using a rolling pin, roll the honey lemon shortbread dough out between two pieces of parchment paper until the dough is 1/2-inch thick.

6. Cut into Rectangles and Poke Holes

Using a smooth sharp knife, cut the dough into twelve equal rectangles. Poke holes on top of the cookie dough with a fork.

Transfer the cut cookie dough onto a prepared baking sheet and then bake 15 to 17 minutes, or until cookies are golden brown.

Allow the almond flour shortbread cookies to fully cool at room temperature on a wire rack before eating.

These cookies are best eaten fresh, as they tend to lose their crispiness over time. To store, place these almond flour shortbread cookies in an airtight container and store for up to 5 days.

Almond Meal: You may use either blanched almond flour or almond meal (learn how to make homemade almond meal in just 5 minutes).

Tapioca Starch: Tapioca starch is also known as tapioca flour. If you don’t have tapioca starch, you may substitute it with equal amounts of arrowroot starch instead.

Baking Powder: Since this is the only leavening agent in the recipe, make sure you add it in. If you are Celiac or gluten-intolerant, make sure to use certified gluten-free baking powder.

Shredded Coconut: I used unsweetened shredded coconut because the recipe uses honey as a sweetener already.

Vanilla Extract: I like using vanilla extract for extra flavor. You may also use almond extract instead.

Honey: I used honey as a natural sweetener, but if you want to keep the recipe completely vegan, feel free to use agave nectar or maple syrup instead.

This recipe was originally posted in 2014 but has since been republished to include clearer step-by-step instructions, as well as recipe notes and substitutions.

Barely adapted from: The Foodie Teen 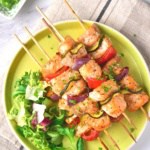