I have a confession to make… I used to be a kitchen disaster.

I was just reflecting on my university exchange in Mannheim, Germany, and recalled how I had so bravely jumped into doing an overseas exchange without the faintest idea of cooking. My, my, how did I ever make it out alive?

You see, it’s really not so easy to cook meal after meal without eating the same food over and over again if you don’t know how to cook very well. Sorry, that was an outright understatement. I had negative knowledge of how the kitchen worked, or how cooking appliances functioned. In fact, I never had a close relationship with the kitchen, appliances, or raw ingredients. It was rather appalling how I couldn’t differentiate between one Chinese vegetable from the next (in its raw form straight from the supermarket), or many other common ingredients for that matter.

I never bothered to make friends with the kitchen.

I’d been so used to seeing food served up in steaming hot dishes at home or at restaurants, after the ingredients had been washed, cooked, and served in time for me to place them easily in my mouth. I never really gave the pre-eating process much thought. How did raw grains of rice become watery minced meat porridge? No idea. How did you make a gravy or sauce thicker with corn starch? No idea. What was the difference between grilling and barbequing? No idea.

Looking back, it is extremely embarrassing to admit that I was completely undomesticated (no, that doesn’t mean I was a wild animal prowling around in search of food all the time). The problem wasn’t that I couldn’t cook, or that my Nanyang Girls’ High School Home Economics teacher failed terribly in domesticating me. I just never developed any interest in getting to know my kitchen better, and slowly, this lack of relationship with my kitchen cultivated an innate, built-in fear of operating any kitchen appliance.

When I first arrived in Germany, Faye introduced me to the microwave rice cooker (which she had bought at a department store in Bugis). Faye is a friend from SMU who also happened to be my roommate in Mannheim, and we both approached our shared kitchen with levels of apprehension – only that Faye was a little braver and more innovative with her food experiments. So, it sufficed to say that Faye was among the first to introduce the kitchen to me.

If you’re Asian, and have relatively Asian taste buds, you’d know the importance of rice in the Asian diet, and how it is practically the bane of our meals, without which a meal would feel completely empty and undefined. (Fine, it may be a little exaggerated, but I love rice – all sorts of them – if you do too, here’s an article on rice and the various ways to cook it). Given this, you should understand why being equipped with our microwave rice cooker, we felt ready to conquer the world (or at least I did). It was a miracle to see how just 20 minutes in our German kitchen microwave could convert long, fine grains of rice into the bowls of steaming hot white fluffy base of my meals. I would marvel in awe as I waited for the microwave to work its magic, while Faye showed me a couple of tricks with the saucepan. We made Chinese Bak Choy (literally “White vegetable”) stir-fried in soya sauce, chopped garlic and a pinch of corn starch to thicken the sauce. We cooked chicken in oyster sauce, and once in a while, fried rice or fried noodles. Basically we whipped up dishes that were relatively easy to make –dishes for kitchen idiots which if you messed up, really meant you were a complete idiot.

My fear of the kitchen at that point of them limited me to cooking with just a few familiar ingredients – I didn’t mix well with neither strange cooking appliances nor new ingredients, so I thought decided that I would prefer eating the same boring dishes over and over again instead of experimenting with tastier dishes, because at least I would be eating something safe and edible.  So during that one semester, my diet pretty much evolved around stir-fried vegetables, stir-fried chicken, steamed rice, fried rice, fried noodles, fried eggs, and a ton of pasta (the kind you throw in the pot for 30 minutes and then pour some heated up pre-made canned sauce over).

Honestly, my memories of cooking in the shared kitchen do not go any further than that. It is quite a shame to remember my lack of dietary variation, and quite a horrid thought (now that I am no longer so clueless and have finally climbed out of the “Kitchen Disaster” category).

Thankfully the semester in Mannheim was just a mercifully short four months, and not too long after, my body recovered from the lack of a well-balanced diet. The effects of too much student-budget pasta and the same repetitive dishes had an obviously manifested effect on my body – I remember returning back to Singapore from exchange, and having my brother Ronald and my cousin Shawn both urge me to go to the gym to shake off some of the excess pasta fats.

I finally turned the page!!

Ah… thank god that disastrous period of my kitchen experience is finally over (I might have successfully swept it under the carpet, and hope that it will never ever see daylight again). And thank god that I have finally gotten it off my chest and aired my dirty laundry in public – for all of you to see my horrific past as a Kitchen Disaster.

This is Faye and I in our Mannheim kitchen in 2007, oblivious to our fears!! 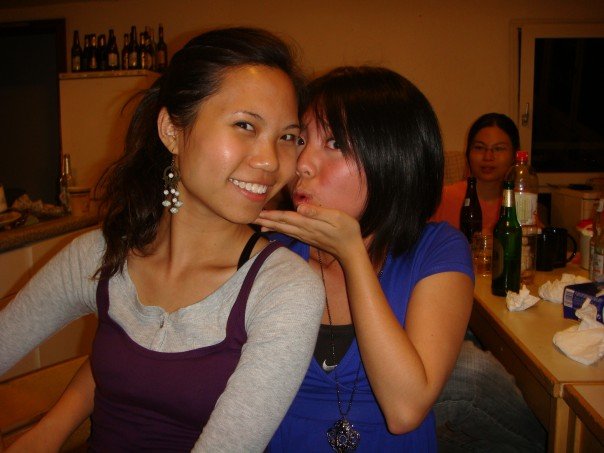 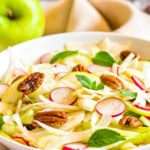