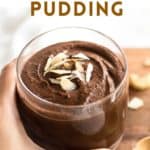 The simplest vegan cashew chocolate pudding you’ll ever make (it’s also gluten-free!). All you need is 5 minutes of hands-on time, a handful of ingredients, and a blender. How much easier does making a dessert as decadent as this get?

Once in while, I get hit by a sudden strong craving for chocolate – but not just any type of chocolate. Sometimes I make these fudgy gluten-free brownies (our absolute favorite!), or bake this delicious chocolate coconut cake, or even make my own raisin and seed chocolate.

Other times though, I like to eat chocolate in the form of rich, decadent, and thick pudding. What I don’t like so much is spending time cooking and simmering at the stove, especially when I want the chocolate pudding RIGHT NOW.

Here’s where this crazy easy recipe for vegan chocolate pudding comes in handy. There’s no cooking involved, you only need a handful of ingredients that I’m pretty sure you already have in your pantry, and the only thing you’ll be using is an electric blender (which means less cleanup, hooray!).

Best of all, this chocolate pudding can be made with just 5 minutes of hands-on time, so how’s that for a winner?

As I mentioned before, Juan developed a dairy intolerance in early 2020, so we’ve been trying to keep things in the kitchen dairy-free, which may at times be quite challenging (in terms of tastes and textures).

Thankfully, this chocolate pudding is deliciously creamy and rich, thanks to one of my favorite ingredients – cashews! Over the years, I’ve found it incredibly handy to always have a bag of cashew nuts stashed away in my pantry.

When a recipe calls for non-dairy milk, I use cashews to make a super easy 5-minute cashew milk, or when I’m in need of a low-carb white gluten-free flour and don’t want to spend money on blanched almond flour, I make this 5-minute cashew flour that’s been such a lifesaver.

In this recipe for chocolate pudding, soaked cashews provide a creamy base (in place of whole milk). If you don’t have time to soak cashews, you can also use raw cashews, and while the final texture can be a little grainy, I don’t mind. In fact, I actually like it.

Since there’s no cooking involved, the most important step is blending, which can be done with either an electric blender or a food processor. I don’t own a food processor, but a blender is more than sufficient.

Start off by combining the soaked cashews, vanilla extract, melted coconut oil, maple syrup, filtered water, and cacao powder in the bowl of your blender. Blend for the next few minutes, stopping and scraping down the sides as needed.

Now, this really depends on how you like your pudding. If you find the pudding too thick for your preference, you may want to add an extra tablespoon of water at a time, until it’s smoother and creamy enough. Once the pudding has reached the consistency of your choice, you can stop blending.

Now that we’ve got the pudding blended, I recommend chilling it for at least 15 minutes so it thickens slightly – as the coconut oil in the recipe chills, it solidifies as the temperature drops, and the pudding takes on a thicker consistency. However, this is not absolutely necessary.

If you are impatient and don’t care about the pudding thickening, you can also eat it straightaway. (Your choice, no judgment here. Everyone has a right to their individual pudding thickness preference.)

I also recommend topping the pudding with a sprinkle of toasted coconut chips, because I love the contrast in both color and texture. A bit of crunchy, golden brown coconut chips certainly makes this creamy, rich vegan chocolate pudding stand out more, in my opinion.

If you enjoyed this, you’ll also love these recipes:

The simplest vegan cashew chocolate pudding you’ll ever make (it’s also gluten-free!). All you need is 5 minutes, a handful of ingredients, and a blender. How much easier does making a dessert as decadent as this get?

Coconut oil: As the pudding chills in the refrigerator, it will thicken slightly because of the coconut oil in the mixture. If you don’t have a preference, you can eat the pudding straight after blending – it tastes just as good!

Maple syrup: If you prefer another sweetener, you can substitute the maple syrup with monkfruit sweetener or liquid stevia (make sure to check substitution quantities according to brand).