As you probably already know by now, ever since Juan found out about his allergies to milk, eggs and soy, we’ve been spending plenty of time in the kitchen, trying to find our way through this new challenge by testing out as many recipes as we possibly can.

To be absolutely honest, it does get extremely frustrating at times, especially when recipes don’t turn out the way we expect. Despite the fact that I’ve been cooking a lot over the past 4 years, I now feel like I’m back on the first day of cooking class again, starting on an empty slate, with plenty of questions and doubts clouding my head.

I remember when I first began cooking. Everything was intriguing but also completely frightening.

The first time I used yeast to make homemade bread, I could feel my heart pounding in my chest, both terrified and excited about the outcome. Would the dough rise? Would the bread taste good? What if it’s a failure and I end up throwing it away?

This pattern seems to repeat itself with new beginnings.

This familiar fear of the unknown seems to return every once in a while, especially when there are new paths to take and conquer.

When I arrived at the Ministro Pistarini airport in Buenos Aires in mid-April, 2010, my hands clutching my luggage tightly, I was ecstatic, but also nervous and frightened. Did I make the right choice in moving halfway across the world for love? What if things didn’t work out? How was I going to face my family and friends back home in Singapore? At that point of time, I gave myself a year to see if things would work out, but I’m still here six years on, so you can say that they did!

Earlier this year, as I stood between two diverging routes trying to decide if I should continue working as an employee or forge my own path as a freelance writer and food photographer, I was immobilised by fear.

What if I wasn’t able to earn a decent living from being my own boss? What if I had to return to working for someone else’s dream?

It was a terrifying choice to make, but I eventually chose the path less travelled, and am now working for myself – one of the best decisions I’ve ever taken!

You see, even though the recurring theme here seems to be fear, it’s really all about courage.

Courage, in my opinion, is going ahead and doing something despite your fears. It’s taking the plunge and diving off the cliff despite your terror of heights; it’s looking the hateful fear in the eye and saying, this is what I’m doing to do anyway, because my desire is greater than my fear.

My good friend Jane and I were talking about courage the other day. I really wish you could meet Jane and get to know her. She’s an inspiring, fiery woman whose passion for what she does leaves you in awe.

Jane quit her comfortable bank job in Singapore back in 2014 and she’s been traveling the world for the past two years, an adventure that most can only dream of doing. The thing that separates her from the dreamers? Courage.

Apart from being an avid traveler who has covered large portions of the globe, she’s also a life, awareness and confidence coach and personal development facilitator whose dream is to help others achieve the life that they’ve always wanted.

Very recently, Jane launched a podcast series on her website called “Stories of Courage”, in which she interviews people who have made decisions in life that may not be easy, but do so anyway.

In her own words, “By interviewing these inspiring people and compiling their stories into podcasts, my desire is for you to realise that living courageous lives with no regrets is not impossible at all – we just have to start taking little baby steps today. It doesn’t matter what your dream is, the more important thing is to take the first step towards it. More importantly, I hope that these stories will make you realise that you are not alone in this journey – we are all in this together.”

When Jane asked me to tell my story on her podcast, I was both honored and thrilled. Of course I said yes immediately. If my story can encourage one other person, it’s totally worth it.

Head over to Jane’s site to listen to my story of courage: when desires are greater than fears! I’ll still be here when you’re done!

I’ve realised that the secret of being courageous lies not in being immune to fear; the secrets lies in going forward despite the “what if”s and the “I don’t know”s  – a method that has proven to work over and over again.

That’s why I’m going to use this method to figure my way out of this allergy-free maze, step by step, dish by dish. Baby steps, one at a time.

Today’s baby step is making homemade cashew milk. Since milk is so essential in baking and cooking and Juan drinks milk on a daily basis, we started making our own milks a month back.

Making your own nut milks is really not as scary as it sounds, plus, it’s also a lot cheaper than buying store-bought nut milks! All you need a good electric blender and a nut milk bag to filter the milk when it’s done.

So far, our favorite is cashew milk, because it’s quick to make, incredibly simple and tastes amazing. I like cashews for several reasons – firstly because of its neutral taste, and mainly because of its high content of heart-healthy monounsaturated fats, which help to reduce high triglyceride levels (which is correlated with high risk of heart disease.)

Here’s how you can make your own cashew milk.

Begin by placing one cup of raw cashews in a large bowl of hot water, and allowing it to soak for at least 15 minutes (this is get rid of the phytic acid in the cashews). Once the cashews are finished soaking, rinse them very well and place them in your blender together with four cups of filtered water, then blend for one minute until you get a smooth milk. Next, add in honey and vanilla in the amounts that you like until you’ve got the desired taste. I’ve found that two tablespoons of honey and two tablespoons of vanilla extract is the combination Juan and I most like.

Before drinking the cashew milk, pass it through a nut milk bag to filter any sediments that remain (if you don’t have a nut milk bag, use a sieve). Pour milk into glass jars or bottles, and store in the refrigerator for up to 3 days.

There you go, homemade cashew milk in just 20 minutes! Try it today and let me know what you think!

Homemade cashew milk is not only quick and simple to make, it also tastes absolutely delicious! Make yours today in just 20 minutes, it’s cheaper and healthier than the store-bought version! 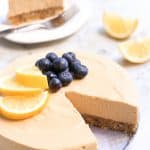