Imagine sitting alfresco at a deli in the heart of the Big Apple.

Your cappuccino is still warm in your hands, and a halfway-eaten pastrami sandwich lies on a small plate next to it. You lift your eyes up from the book you’re reading and glance lazily at the street, where tall, classy, and elegantly-clad New Yorkers walk quickly by on the sidewalk, as they soak up the toasty afternoon sunshine.

I’ve never been to New York, but I imagine a typical afternoon in the city might be something like this, a mix of calm luxury amidst bustling activity, where cafes and delis thrive among countless fast food stores and high-end restaurants.

I imagine an eclectic mix of cultures, a sea of millions of faces blended altogether and distinct languages spoken simultaneously such that they fuse and form a gentle but highly energetic buzz.

It’s the New York I’ve construed from Sex and the City and the Devil Wears Prada, stuck somewhere in between Elizabeth Gilbert’s version of the Big Apple in Eat, Pray, Love. I envision chains of Starbucks elaborated in Christmas decorations, and plenty of stores to choose from for brunch, where you can easily get a bagel sandwich and a cup of coffee, sit down, and observe the crowd.

The lovely Sex and the City ladies

Before I get too carried away with my ideal version of New York, let me get back to what I wanted to share with you – the brunch Juan and I had on Sunday at Big Mamma in Buenos Aires.

How did I get from Big Mamma to New York? You wonder, with good reason.

You see, I’d gone to this Buenos-Aires based deli after my cooking professor Pelusa Molina recommended us to – apparently the owner was a student of hers around thirty years ago, and his New York-style sandwich deli has been a success over the past few decades. I’ve never set foot in the USA (unless you count Hawaii), and I’m nowhere close to New York, so when Pelusa told us about this little gem in the Belgrano neighborhood (Juramento 2156, Buenos Aires), I dragged Juan there to try it out.

The deli reminded me of a huge house, complete with a wide, large patio in front with alfresco seating. 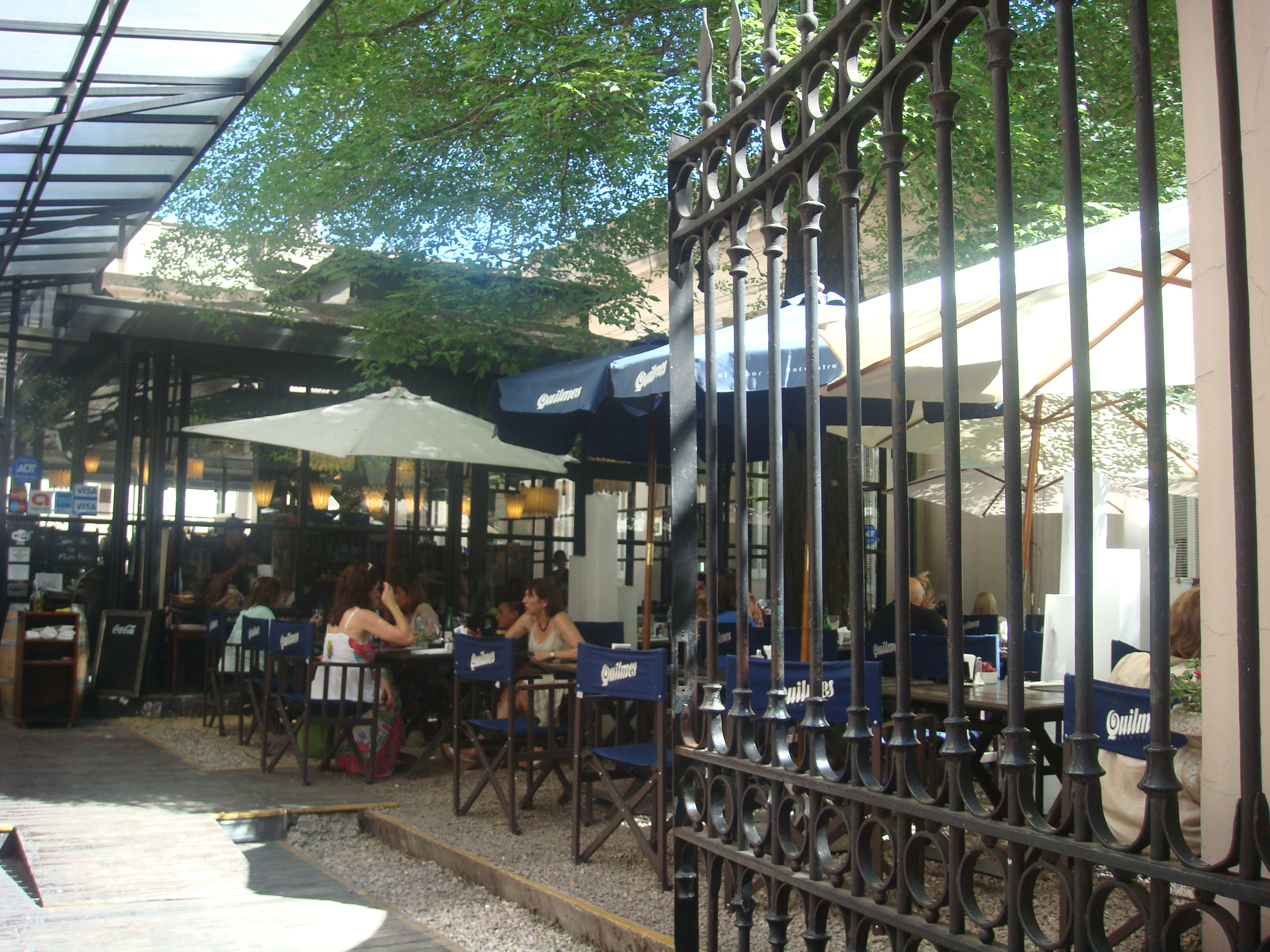 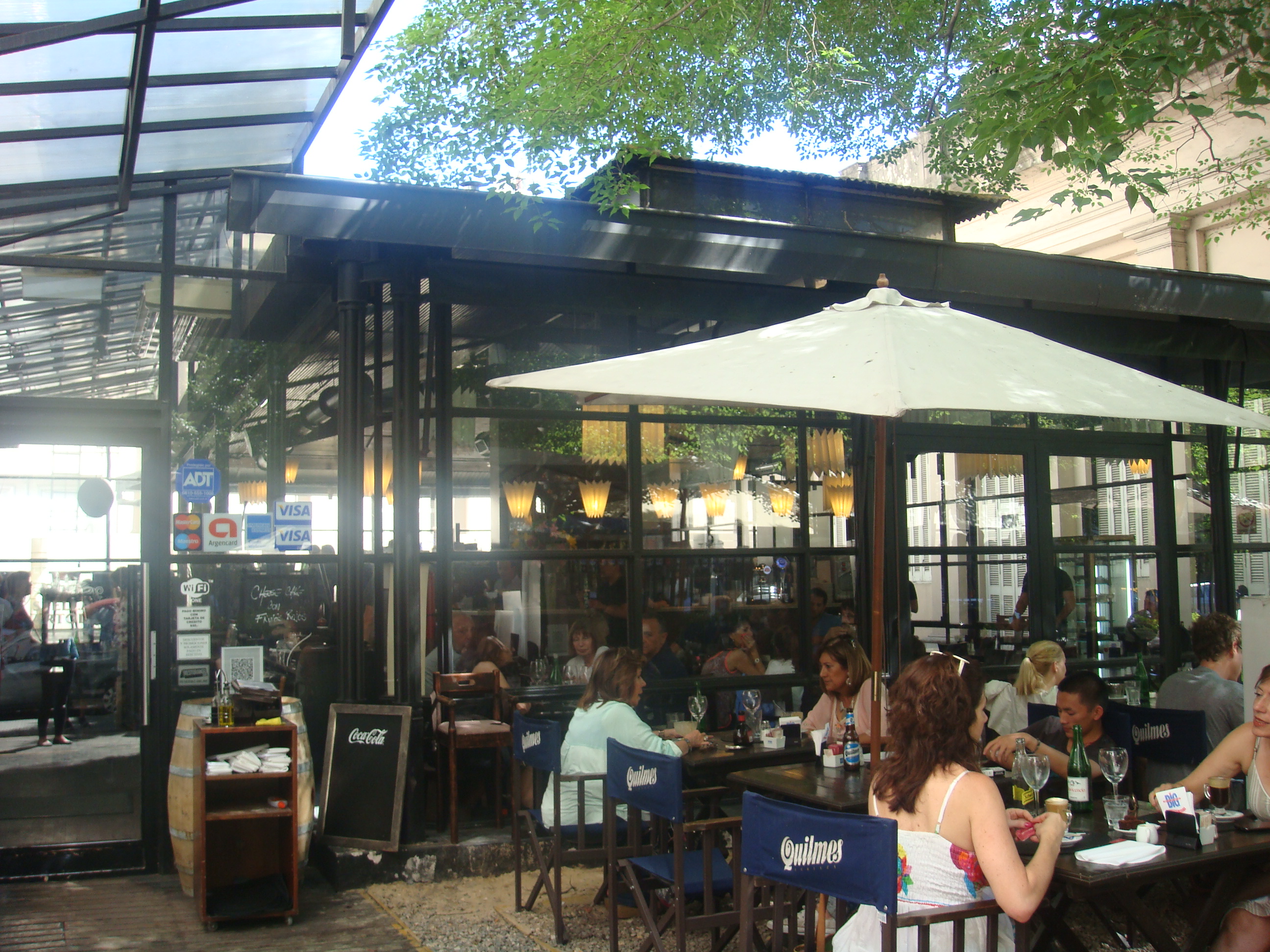 Partial view of the outdoor patio

We chose to sit indoors despite the lovely patio, because the heat was back in Buenos Aires in full force.

Thankfully it was air-conditioned inside, where tall glass windows illuminated the interior with bright beams of sunlight, creating some sort of greenhouse illusion. Juan and I settled on some really comfortable couches (which were a delight to lounge on but a little difficult to eat on), and set about dissecting the wide-ranging menu – which had everything from sandwiches to pasta, to steak and a fundamental long dessert list. 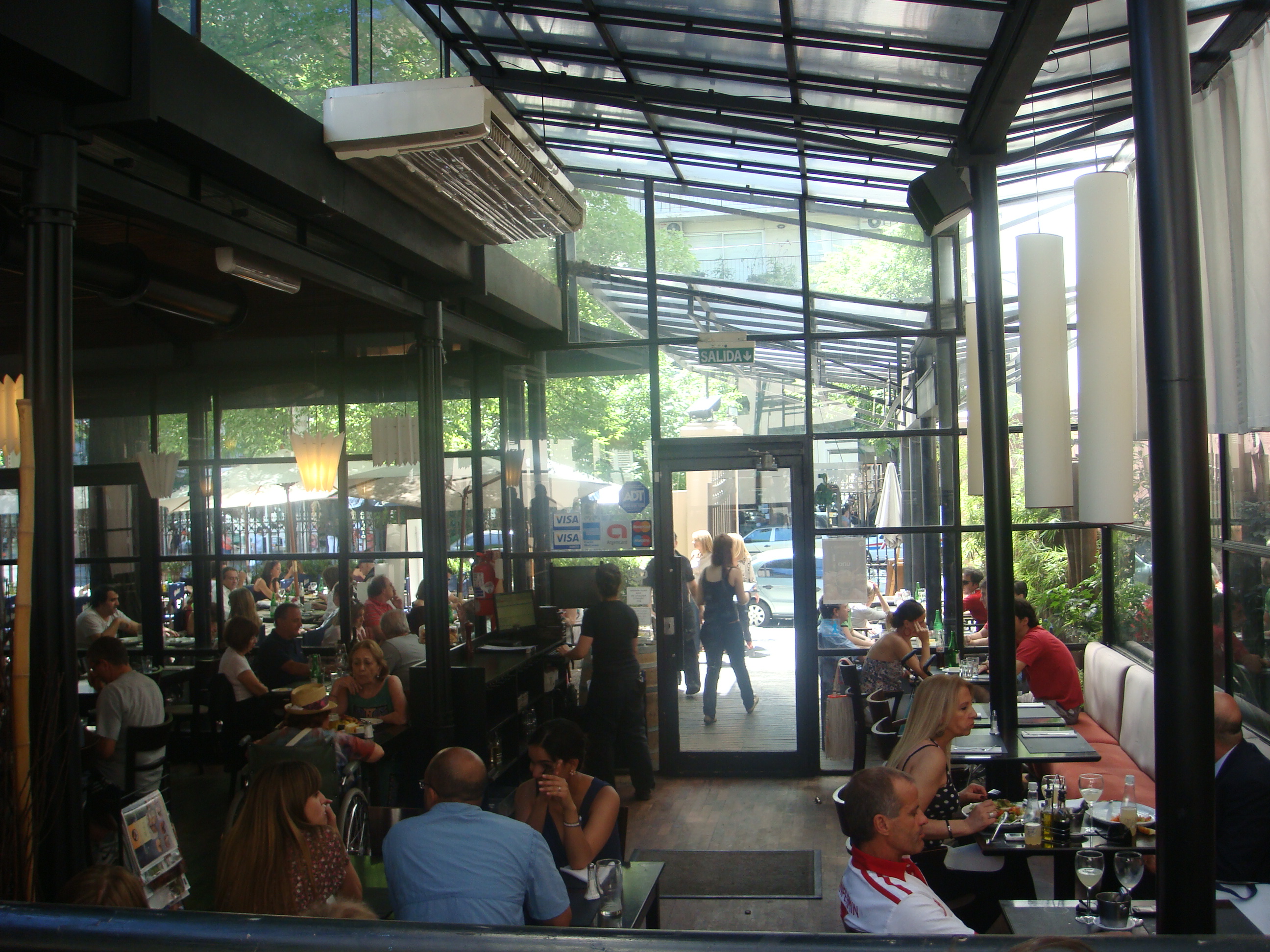 Tall glass windows and walls allow sunshine to stream in 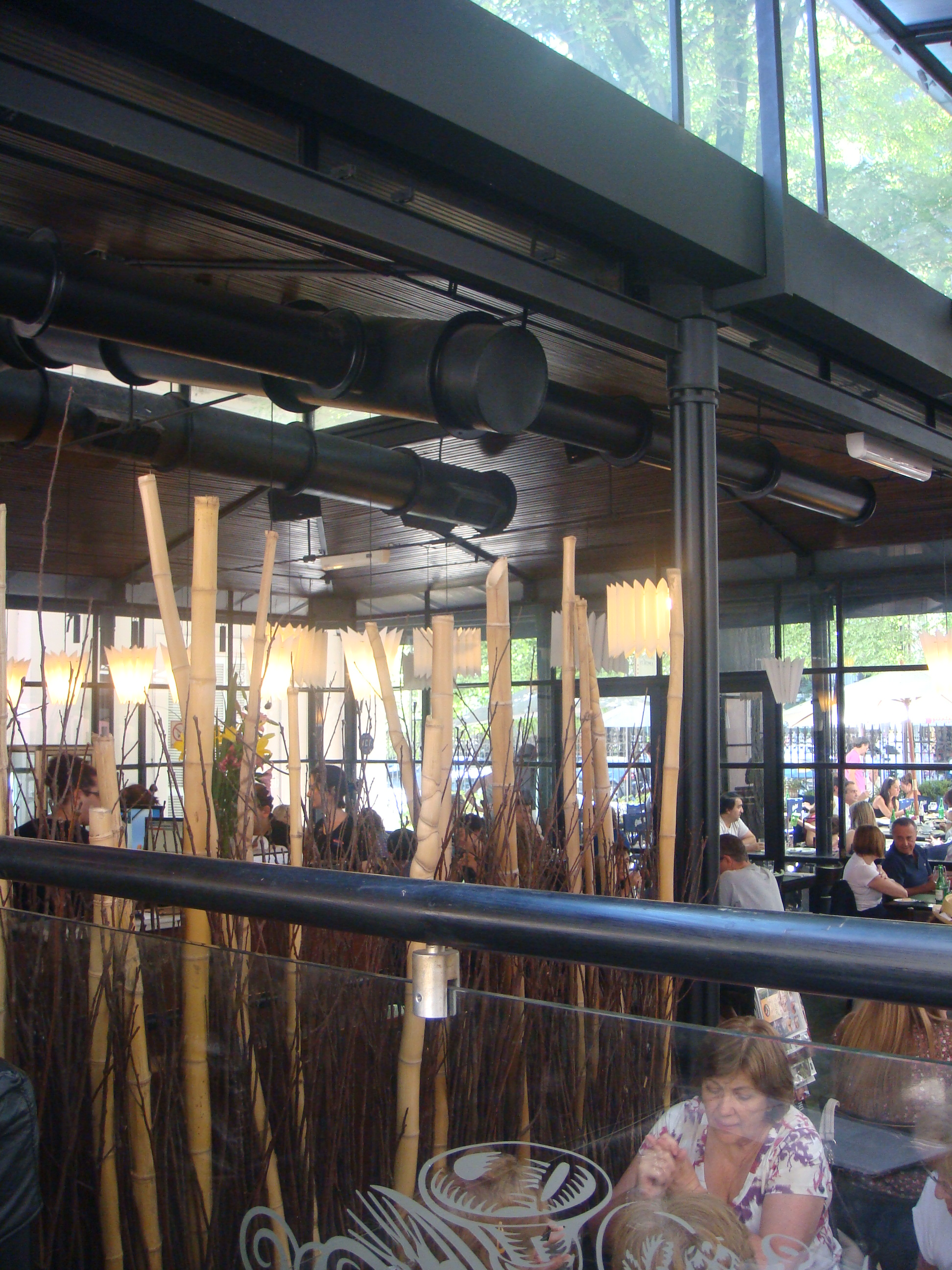 Angle view from the couch we were sitting on 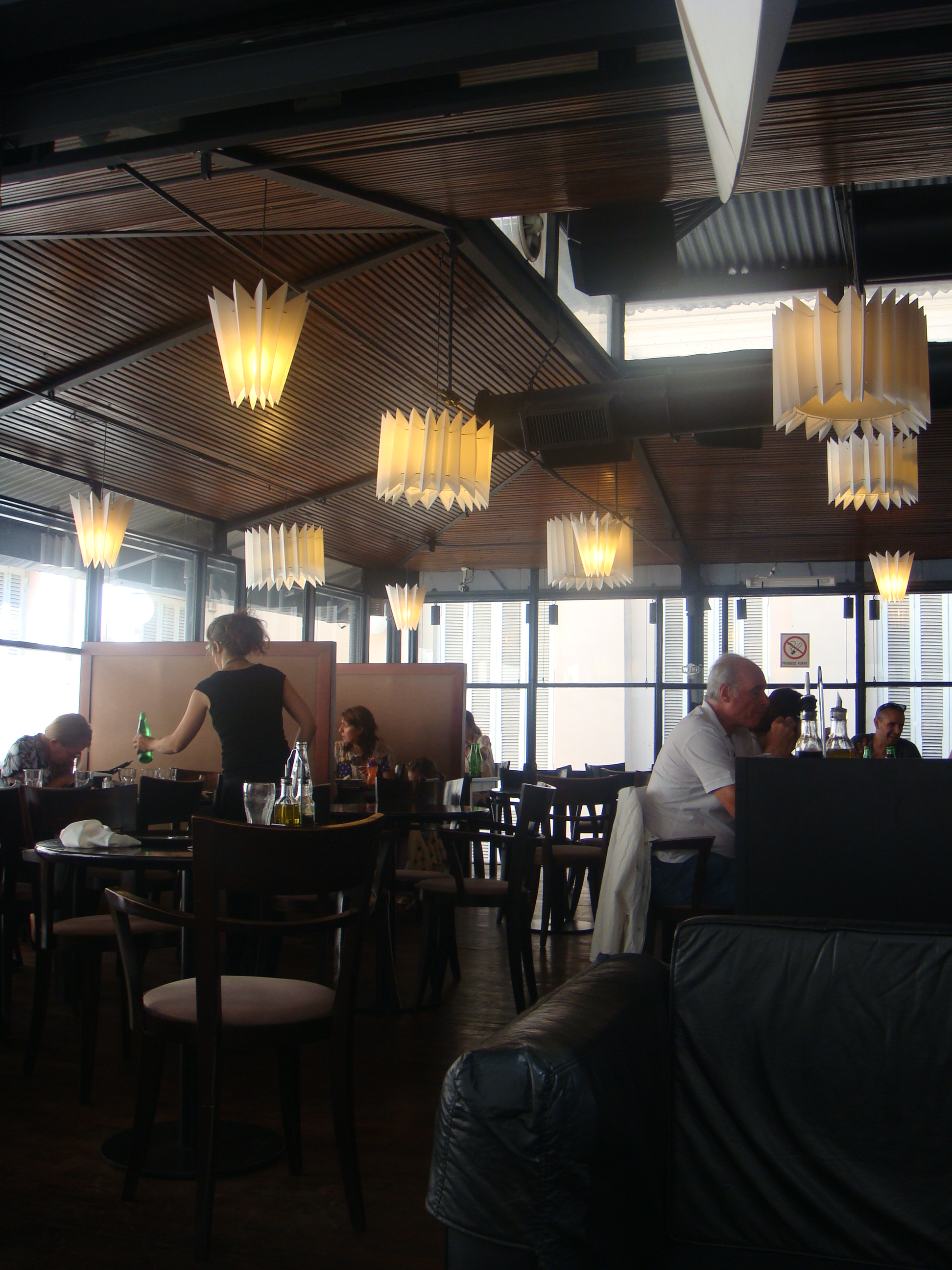 Another view of more seating area

The appetizer: freshly-baked bread with a mixture of sour cream, mayonaise, parsley and garlic 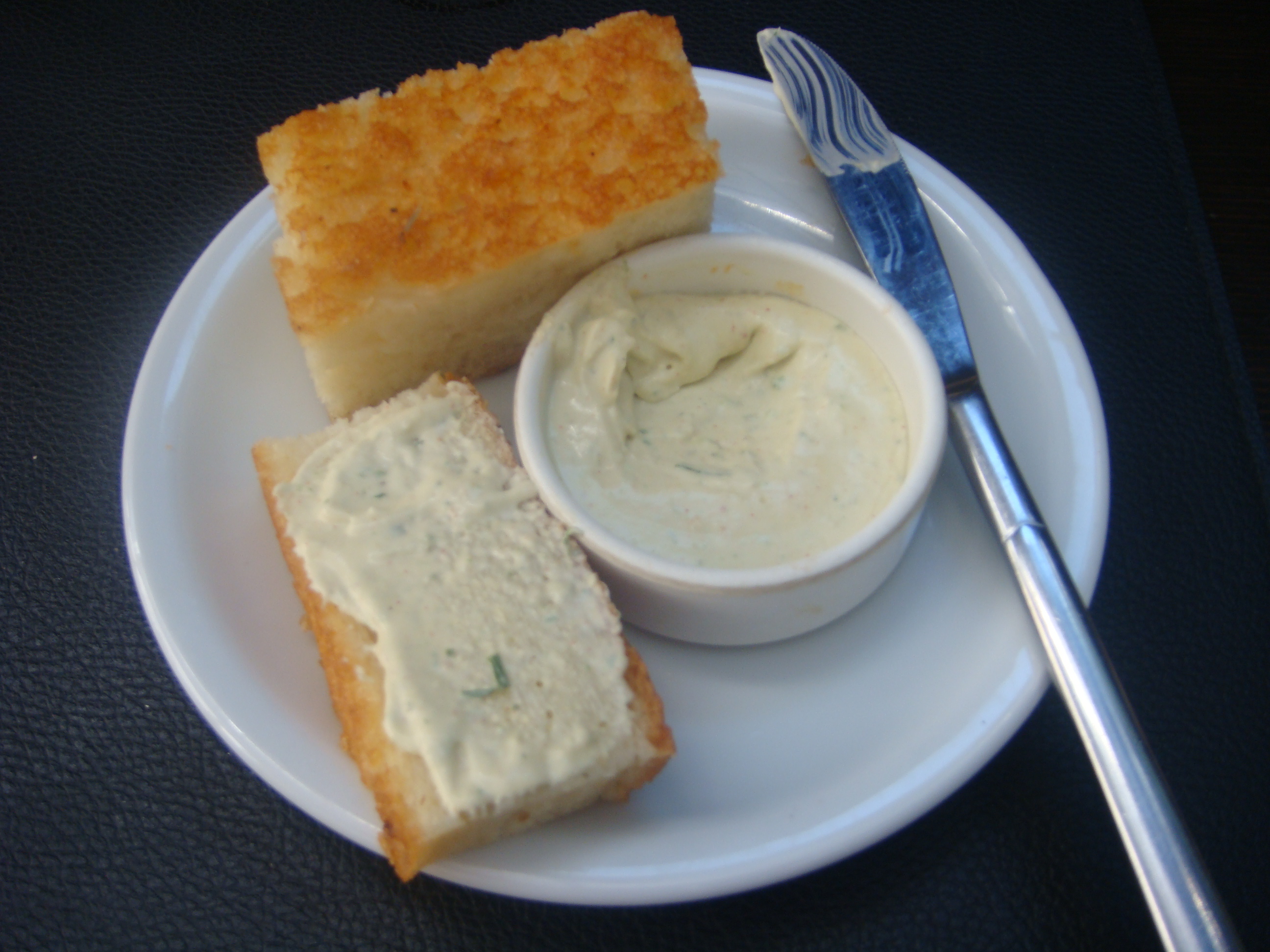 The dip was really quite heavenly

I’ve never been a huge fan of sandwiches – at least not for a complete meal.

However, since the highlight was its sandwiches, I was decided on trying the star platter – the Big Fresser’s Hot Pastrami on Rye, which was, literally as the name suggests, a pastrami sandwich served in rye bread, together with coleslaw and Kartoffelsalat (German potato salad). Juan had ordered a tenderloin sandwich, but unfortunately I was too slow to capture it on camera. (I don’t think he loved his sandwich too much.)

Big Fresser’s Hot Pastrami on Rye to pack a punch

The sandwich was spilling to the brim with pastrami strips, which I relished wholeheartedly, but later regretted, because it left me with an unquenchable thirst no amount of water seemed to be able to quench. But it was still delicious, and I enjoyed the sandwich a whole lot more than I had imagined. I thought the coleslaw was a little yellow for my liking, but it did taste quite like the coleslaw I know, and Juan liked the Kartoffelsalat a lot more than I did, because he loves potatoes in all shape and sizes, and I’d give the sandwich 7.5/10. 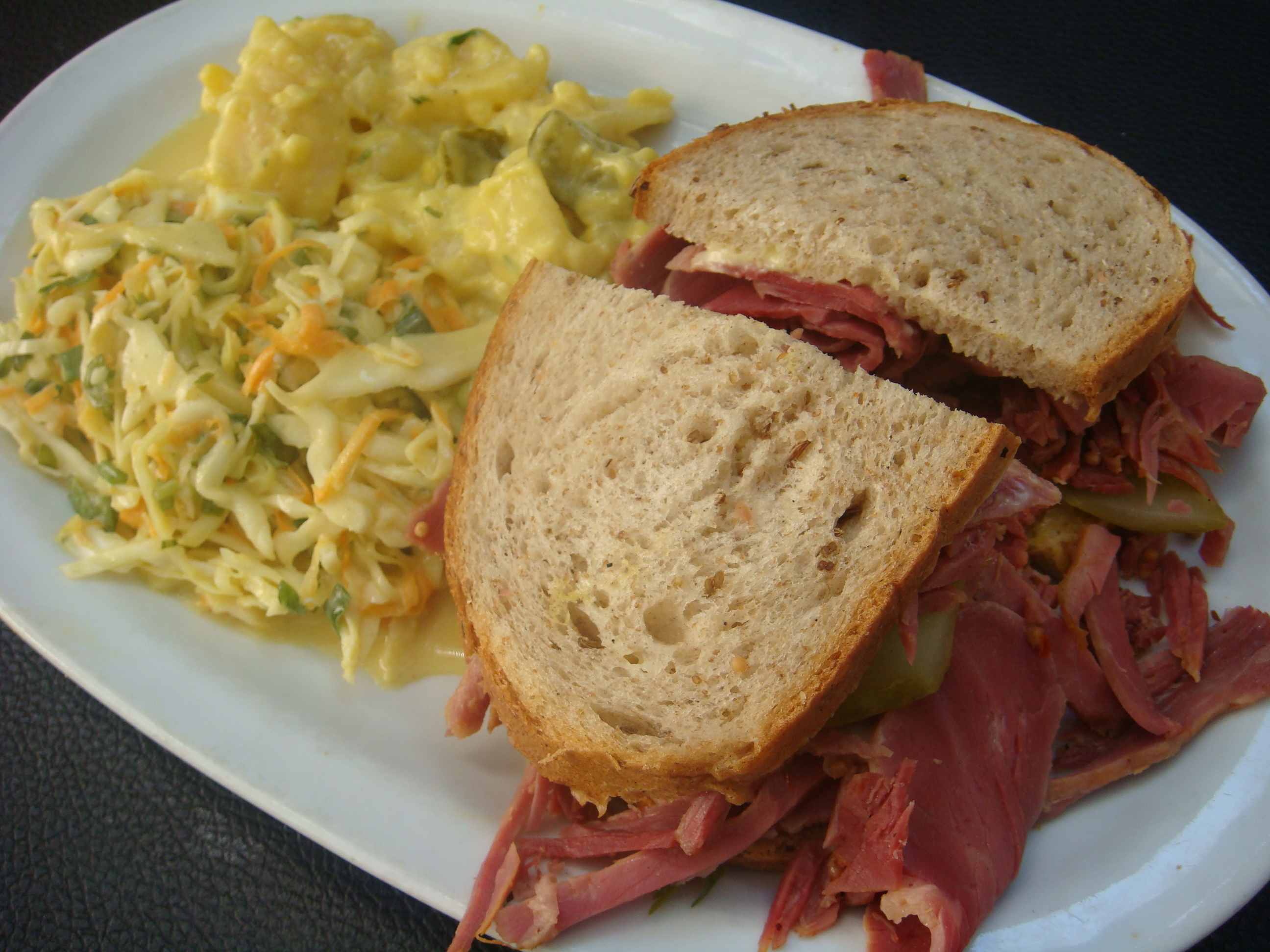 Shreds of pastrami spilling from my sandwich

Apple Ratatouille to sweeten it up a little

Now that we had conquered the famous sandwich, we could finally advance to dessert, and scouring the varied list of desserts, we settled on an apple ratatouille, which really was slow-cooked apple shreds infused with the juices and zests of oranges, lemons and grapefruits, and a little rum, on which whipped cream was generously poured upon. It was the first time we had tried anything like this, and the combination of the fruity sourness with sweet cooked apple was quite unlike anything I’ve tried, and it was highly addictive. I’d give the dessert 9/10. 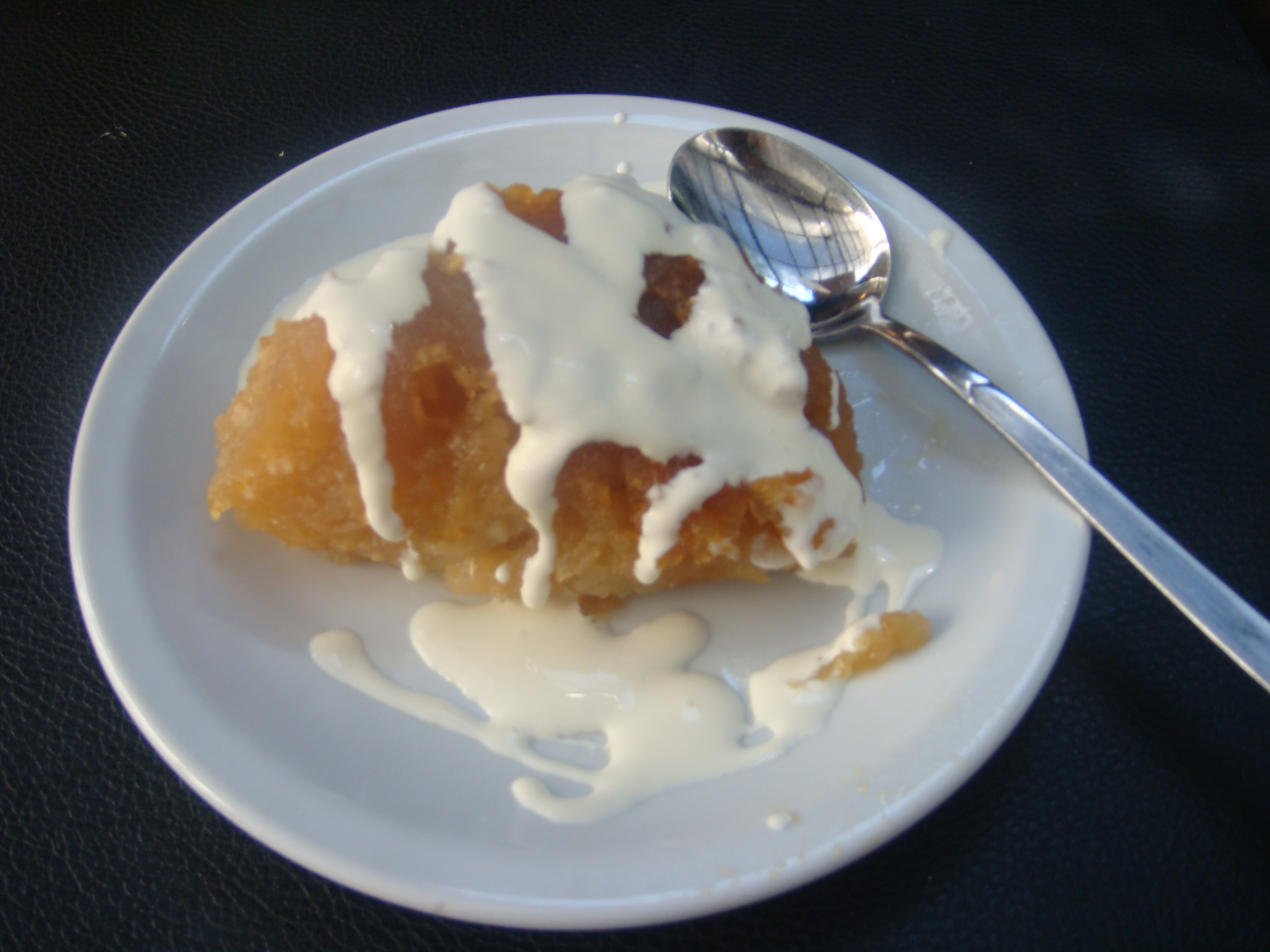 Thankfully we had a 20% discount with the Club La Nacion card, so that made the receipt less of an eyesore and a blow to the pocket. But I suppose people go there to soak in the Big Apple feel, and don’t mind paying a little premium to be transported (if only in imagination) to New York for a while.

I’m not sure if delis in New York are like Big Mamma, but I enjoyed the cosy, homey feel of the restaurant, where you can laze the entire afternoon away, snacking on a sandwich or a delightful dessert. I was enamored with the greenhouse effect (which naturally lit up the entire restaurant and my mood), and swept up in a holiday mood, especially since the festive season is just round the corner.

I’d recommend going to Big Mamma at least once to try it out, sit in the sunlight and relax as you get teleported to make-believe NYC.

« Why do I photograph food?
Because Siblings are Like Favorite Foods » 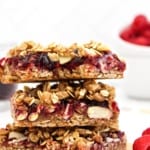 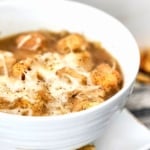 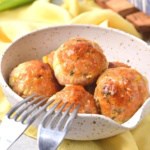