This Argentine bread pudding has a little twist to it – it also has apple slices which go really fantastically well with the entire pudding. Pelusa Molina taught us how to make this yesterday at cooking class, and according to her, this recipe was born in a small canteen in the Belgrano neighbourhood in Buenos Aires! A very traditional dessert in Argentina, it used to be served in almost all restaurants a few decades ago, but its presence is increasingly absent these days as more modern, trendier desserts such as Tiramisu take its place.

It’s also really simple to make, so for those who have always thought that bread pudding was really difficult, here’s the secret recipe! I suppose if you dont like apple in your pudding, you can always take out the apply and use more bread instead! Unfortunately I only have the picture of the final result – since I can’t take photos during my cooking class. But recipe is so simple its easy to follow.

1) Combine 150g of sugar and 75ml of tap water (2 portions sugar, 1 portion water), and heat over medium fire without stirring
2) Once the sugar-water mixture starts bubbling, and turns golden brown, remove from fire
3) Pour caramel into a budding mould made for the oven, making sure to cover the entire surface of the mould with caramel. Once caramel cools, it will stay still and coat the surface.
4) Cut the skin of the baguette, and once de-skinned, slice the baguette into very fine slices (less than 1 cm each slice)
5) Peel the apples and slice them very thinly (as thinly as possible)
6) In a mixing bowl, put the eggs, milk cream and 100g of sugar, mixing well without letting air enter the mixture
7) Using a clean brush, paint one side of bread slice with melted butter, and place bread slices with buttered side down on the caramel, until a first layer covers the entire surface of the mould.
8) Arrange a layer of apples for the next layer, and above the apple layer, pour mixture from step 6 to cover the apples (not all the mixture, just a bit).
9) Add another layer of bread, this time with the buttered side upwards
10) Pour a little bit more of mixture from step 6
11) Add the remaining apple slices to form another layer
12) Add the final layer of bread slices with buttered side upwards
13) Pour the remaining mixture from step 6 to cover every bit of ingredients in the mould
14) In the oven, heated to 160 deg cel, place a large metal tray which is half-filled with water (for steaming effect), and place the filled pudding mould in the middle of the water. Bake/Steam in oven for 40 – 50 minutes or until the pudding is firm when you press your finger against it
15) Allow it to cool before dis moulding and serving with a scoop of cream or ice cream 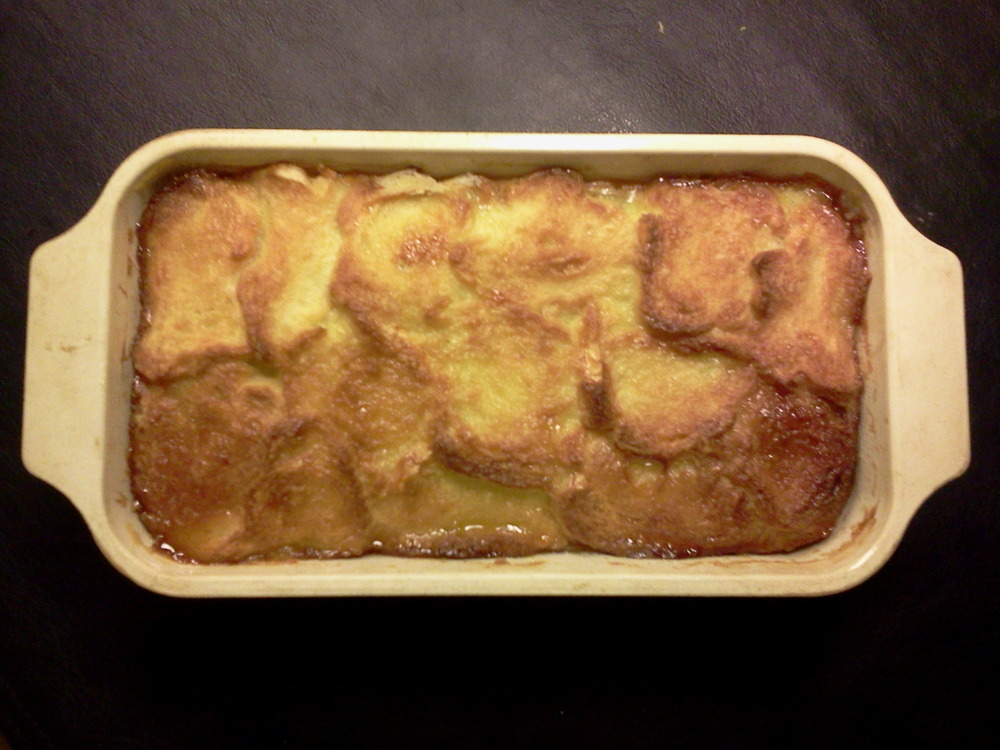